With their upcoming devices and updates, Apple is trying to create the most seamless, convenient experience for all users on all of their devices, both OS X and iOS alike.  In last Tuesday’s blog, I covered upcoming accessibility features in the new iOS 8 available this fall.  During the keynote conference this year, in addition to releasing the details on iOS 8, Apple also gave an overview of Yosemite, the update for OS X devices.  From brief overviews of the upcoming updates, it can be assumed the company is striving for universal access, and is making their devices more accessible than ever.

Yosemite features offering potential benefits for those with disabilities include:

1. OS X will offer a very different visual look including “Dark mode” (perhaps comparable to iOS 8’s Grayscale mode) to turn the normally light-colored interface into darker, less obtrusive shades of black and gray.  Adjusting the contrasts may benefit users in darker environments, and may especially benefit those with low vision and some types of dyslexia.  Yosemite will also offer a more refined text across applications, and will have 2D icons which may benefit those with visual impairments.

2. Yosemite’s Mail offers tools comparable to those of Preview, offering a Markup toolbar to draw on photos and PDFs directly in Mail.  This feature may benefit those with literacy issues.

3.  Family Sharing is ideal for those who need purchases overseen or approved by somebody else, including individuals with cognitive impairments and more.  When there are multiple people living in the same home with just as many Macs, iPads and iPhones, sharing purchased content from Apple’s stores has been a challenge.  This holds especially true if purchases are made under different Apple IDs.  With Family Sharing, each member of the family (up to six people) can join the Sharing group and have access to all media purchased by any other member of the group. 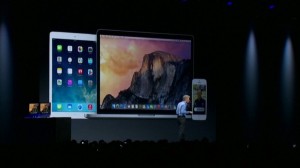 4.  Spotlight will be improved in both software updates, offering instant results and displaying snippets of each with images to give users instant awareness of the found content.  This helps users find anything on their Mac faster, and offers a more interactive experience than ever before.

5.  The continuity mission among both operating systems will indubitably increase accessibility.  With the continuity feature(s), users will be able to seamlessly accomplish “phone only” tasks on any device, and have the ability to begin a task on one device and pick up from the same spot on another device.

6.  Both Yosemite and iOS will feature 24 new dictation languages, which will help aid in accessibility among international users.

Though the above features are not necessarily designed with accessibility in mind, they will indubitably benefit users with disabilities.  For further information on Yosemite, click here.