The search engine giant Google has been working on wearable technology for quite some time now. From their smartwatches to Google Glass, their mission of making technology as portable as possible is becoming very evident. The mission will become even clearer with Google’s idea of smart contact lenses.

A new patent application details how Google could add sensors and a microcamera to the surface of a contact lens.  According to the application, the wearer of the smart lens would 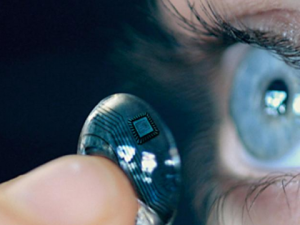 control the lens by blinking.  From the limited information available in the application, the functionality of the lenses is comparable to that of Google Glass, only instead of wearing glasses one will have the technology attached to his or her eyeball.

The description available from Patent Bolt states: “Since the camera would be located on your eyeball, it would be able to align images with wherever you’re looking to avoid obstructing your vision.”

This has especial potential for individuals who are visually impaired because the lenses would be able to see what is going on in front of the wearer.  An example in a Business Insider article stated, “If a visually impaired individual is heading toward a crowded intersection, the smart lenses could theoretically send an alert to that person’s smartphone as a warning.”

The article also features a diagram from Patent Bolt detailing the placement of the sensors:

Due to the implementation of camera sensors directly into contact lenses, there is likely to be much controversy regarding privacy concerns, and possibly even more than Google Glass.  The technology is only in the experiment stage, so there is no telling whether such contact lenses will be available on the market anytime soon.

There may be some less-controversial contact lenses available as early as 2015.  Google has recently taken its smart lens technology and paired up with Novartis’s Alcon eye-care division to create smart contact lenses to help monitor glucose levels through tears for individuals with diabetes.

According to the American Diabetes Association, 29 million Americans (or 9.3% of the U.S. population) are diagnosed with diabetes, a class of diseases in which the body is unable to handle sugar due to inadequate or no production of insulin.

In close, there are a lot of wearable technologies available on the market to help monitor one’s health, but smart contact lenses offer many promises to see a brighter future.