Controlling an object with our minds sounds like something only found in a science-fiction movie.  However, with great advancements in technology the said idea is becoming more of a reality each day.  For over a century, doctors and scientists have been using electroencephalogram (EEG) technology to monitor one’s brain activity.  In recent years, brainwaves have converted into computer commands, resulting in the moving of prosthetic limbs and the piloting of drones.  (Pretty mind-blowing, huh?!)  More specifically, the company InteraXon has obtained a reputation as a leader in brain technology with their smart headband, Muse.

Muse is a sleek, four-sensor headband that allows users to control technology with their 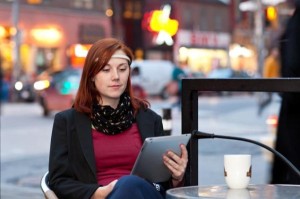 minds via Bluetooth.  It is positioned comparably to a pair of glasses, but with two sensors in the front on forehead and two behind the ears.  Once positioned, it measures the user’s brainwaves and sends the information to a smartphone or tablet. “Viewing that data in real time can show if your mind is wandering, if you’re relaxed, or if you’re in a state of intense concentration.”

The creators behind Muse stated a couple years ago that their goal was: “To develop and promote thought-controlled computing technology by combining neuroscience data, sleek design and state-of-the-art engineering.”  With the use of this smart headband, users may:

In conclusion, this wearable gadget is a step to improving our overall health by helping us focus and alleviate stress.  Though stress may seem minor to many, it can play a role in problems such as headaches, high blood pressure, heart problems, diabetes, skin conditions, asthma, arthritis, depression, and anxiety.

The headband is available for purchase now for $300.  For more information on this brain-sensing technology, visit the Muse website here.