There are 50 million people worldwide with some form of deafness.  Right now, the only available technology to help these individuals is the cochlear implant, which is an invasive procedure that costs about $40,000.  The challenge behind this procedure is that it doesn’t always work for everybody.  For instance, if an individual is born deaf and he gets the implant too late, the odds of it working well are very slim.  Dr. David Eagleman, a neuroscientist, and his graduate student Scott Novich, are combining the limits of human biology with technology to create a new “sense” of hearing for individuals who are deaf.

In order to do this, they are using “sensory substitution,” which is the idea of taking information from one sense and feeding it into another sense.  Their sensory substitution involves a vest device that can be worn under everyday clothes.  It is called the VEST, or the Versatile Extra-Sensory Transducer.  The way the VEST works is that sound is taken from the environment and is sent through the user’s smartphone.  And then the smartphone takes care of all the sorts of signal processing that goes on with the audio signal.  Sound from the environment then gets converted into patters of vibration on the skin. 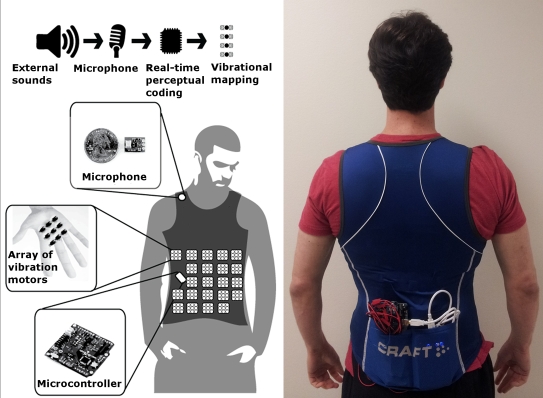 In the Kickstarter video, Dr. Eagleman stated, “The idea is, the brain gets the information from the torso and can figure out how to interpret that information.”  Scott Novich went on to state, “Our device is actually pretty similar to a cochlear implant.  At the end of the day, both are actually just sending electrical signals into the brain–just through different pathways.”

They have already developed a working prototype with promising preliminary data.  It is estimated that the device will cost the consumer less than $2,000.

They hypothesize the VEST device will work for individuals who are deaf, and even be good enough to provide a new perception of hearing.  “This itself has a number of societal benefits: such a device would cost orders of magnitude less than cochlear implants (hundreds-to-thousands as a opposed to tens-of-thousands), be discrete, and give the wearer the freedom to not be attached to it all the time. The cost effectiveness of the device would also make it realistic to distribute it widely in developing countries.”

For more information on this device and the science behind it all, check out Dr. Eagleman’s Lab website here.