According to the Centers for Disease Control and Prevention (CDC), over 3.4 million Americans aged 40 and older are legally blind or visually impaired.  By 2030, that number is expected to rise to 6 million as more baby boomers develop diabetes and age-related disease.  The CDC also notes that vision loss is among the top 10 causes of disability in the U.S., and vision impairment is one of the most prevalent disabilities in children.  The white cane is a tool commonly used among this population that helps them navigate through surroundings.  Even though the cane has been used for centuries, it still isn’t perfect.  Several individuals have set out to create a better piece of assistive technology to aide these individuals.  One of these is a new type of sensor called the Enactive Torch, which aims to help 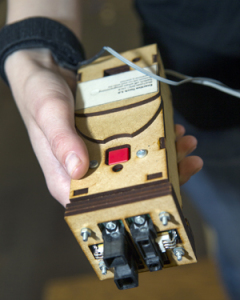 individuals better “see” these objects in front of them.

Getting around is probably one of the biggest challenges for individuals who are blind.  In response to someone asking what it’s like to be blind and using the white cane, Cristina Hartmann stated, “There are a few things that get me: chairs and tables (my cane slips underneath), overhanging brush (again, my cane isn’t high enough), and cracks (sometimes my cane will bounce back, which is annoying).”  With further research, Enactive Torch can be developed to replace the white cane.

As the first device of its kind, the Enactive Torch looks like a large remote control connected by wire to a wristband.  It works similarly to a white cane.  However, it is dissimilar because it does not need to touch anything to inform the user that there’s an obstacle in his or her way.  Instead, it uses infrared sensors to detect objects in front of it.  When it detects an object, it sends a signal to the wristband to vibrate, and the closer it comes to an object, the more intense the vibration.

The device was developed by Tom Froese and Adam Spiers who studied in the Department of Cybernetics at the University of Reading, UK, and was tested by researchers at the University of Cincinnati.  Luis Favela, a graduate student at the University of Cincinnati said, “In my research, I’ve found that there’s an emotional stigma that people who are visually impaired experience, particularly children,” Favela said. “When you’re a kid in elementary school, you want to blend in and be part of the group. It’s hard to do that when you’re carrying this big white cane.”  In its current layout, the Torch is comparable to three to four remotes stacked on one another.  They’re working on making it more compact.

The device in its future renditions will also be good for children who deal with growing up blind. “In my research, I’ve found that there’s an emotional stigma that people who are visually impaired experience, particularly children,” Favela said. “When you’re a kid in elementary school, you want to blend in and be part of the group. It’s hard to do that when you’re carrying this big white cane.”

To learn more about the Enactive Torch, visit their WordPress site.