By now, I’m certain a majority of you have heard of many smart devices available on the market, especially Apple’s flagship wearable, the Apple Watch.  While this smartwatch offers several accessibility features (e.g. VoiceOver), it doesn’t offer the same tactile benefits as Braille. A Korean startup company has thus developed The Dot, a smartwatch featuring active Braille technology. 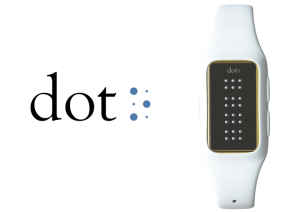 The Dot is a wearable with perforated holes featuring magnets and pins inside that rise to form Braille text messages, making them much more accessible for the visually impaired.  According to the World Health Organization, it’s estimated that 285 million individuals have severe visual impairments, and 39 million are completely blind.  Within this population, an alarming 95% cannot read!  Further statistics listed on The Dot’s website are:

Features of The Dot Smartwatch

Dot CEO Eric Ju Yoon Kim told Tech in Asia, “Until now, if you got a message on iOS from your girlfriend, for example, you had to listen to Siri read it to you in that voice, which is impersonal.  Wouldn’t you rather read it yourself and hear your girlfriend’s voice saying it in your head?”