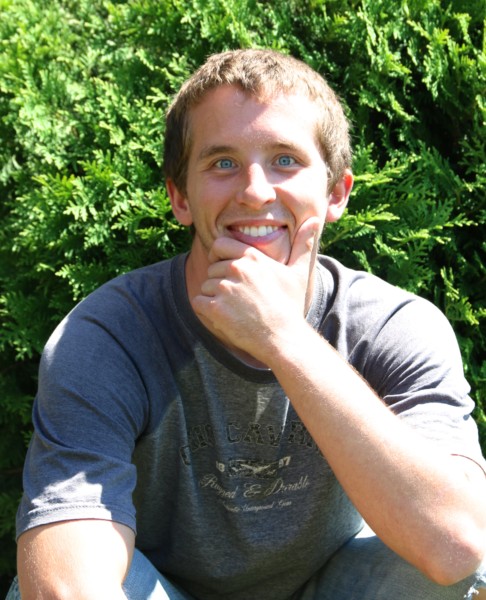 Upon making an appointment to come meet with Nicholi Kauffman he excitedly told me he was moving into his first apartment and would be settled in by the time we met. Nicholi is a student at Ivy Tech Community College in Lafayette, Indiana and moved into an apartment not far for the school.

I pulled up to the apartment complex and was greeted by Nicholi. He was excited that he had been feeling better physically and jogged down the sidewalk to greet me. I went to meet with Nicholi to learn about his assistive technology evaluation and training he received through Easter Seals Crossroads. Nicholi was excited to show me his new apartment he shares with his younger brother. Nicholi gets rides to school from his brother or rides the bus to school. He told me he was happy that his new apartment complex is close to the bus stop. 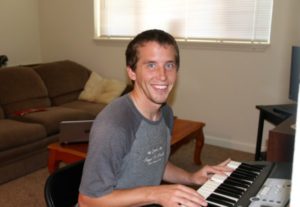 Nicholi shared with me a little of his history and how he eventually started working with Easter Seals Crossroads. I learned that Nicholi noticed when he was a sophomore in high school that he was having difficulty running in a straight line during cross county practice. In 2007, he had an accident in a swimming pool where he hit his head on the side of the pool. He had a spinal tap and MRI after that accident and learned he had Multiple Sclerosis. Multiple Sclerosis (MS) is a disease of the central nervous system. This disease disrupts the flow of information between the brain and the body. The symptoms for MS can vary from person to person. Some common symptoms are: fatigue, spasticity, vision problems, muscle weakness, et cetera. Nicholi first started having problems with his motor coordination in his legs and then began to have tremors in his hands. Nicholi was put on medications to slow any progression, but said he did not feel like they were helping and did not like the side effects. Nicholi eventually started to lose his vision and is now legally blind. He then lost flexibility in his knee and was unable to run or jump.

In high school, Nicholi did not use assistive technology other than a notetaker. In class, his sister was his notetaker. Nicholi graduated from Delphi Community High School in 2009. When he then enrolled to go to school at Ivy Tech, someone told him about Vocational Rehabilitation Services (VR). VR is a state agency that provides services to people with disabilities to obtain or retain employment. His vocational rehabilitation counselor informed Nicholi that there was a lot of technology out there that would make going to school and becoming employed much easier. A referral for an assistive technology evaluation was sent to Easter Seals Crossroads and he was assigned to work with David Frye, Assistive Technology Specialist, at Easter Seals Crossroads. An assistive technology evaluation is a comprehensive evaluation that can be done in the home, work, school, or in the community to determine accommodations that increase an individual’s independence.

David met with Nicholi, assessed his needs, and determined computer access was Nicholi’s biggest barrier. He recommended he use Dragon Naturally Speaking to capture class notes or use for any written homework assignments. Dragon is a speech recognition program that allows a user to speak into a microphone and the software will transcribe the spoken word into whatever 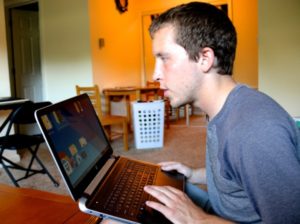 application the user is using on their computer. He also suggested Zoom Text Magnifier, which is a screen magnification software. Vocational Rehabilitation purchased the accommodations for him and David worked with Nicholi to learn the Dragon Dictate program and to get the software program accustomed to his voice. The software continually gets better as it adapts to the user’s voice patterns. David also recommended Audio Note. Audio Note is an app that allows you to take notes that are linked to recorded audio to limit the amount of writing one has to do. At school, Nicholi also has his teacher put notes online and the school provides a scribe for taking notes in class.

Nicholi told me he was hesitant to use the above tools because he was not familiar with them and he did not like to admit he needed help. He said, “I never knew about any of the technology I was shown. I had to be patient and learn how to do things a different way. I had to step back and take a look at my situation and say, “I do need help.” He indicated that David was patient and supportive throughout the learning curve. He said, “I am thankful I now know about these tools and now that I know they exist I continue to look for new things that come out”.

At the time I met with Nicholi, he told me he was feeling better than he had in years. He has begun taking herbal supplements and is now selling them. He was very excited to tell me about how much they have helped him. He believes they are the reason he has so much more flexibility in his knees and no longer has tremors. He has started to jog short distances and ride his bike in familiar areas. He plans to sell the supplements while he is in school for extra income or “to at least cover some of my expenses”. He plans to continue his education at Ivy Tech and thinks he may get a public speaking degree.

I asked him if he had any advice for anyone new to using assistive technology and he said, “I would tell people to not assume that the technology will help you right away. You need to learn the programs and get used to them before they can be helpful. You have to let people help you and be patient.” I told him that I thought that was excellent advice and thanked him for spending some time with me.

We wish Nicholi the very best in the future and to all of you starting to dip your toe into the world of assistive technology, be patient and know The INDATA Project and Easter Seals Crossroads assistive technology center are here to provide support.