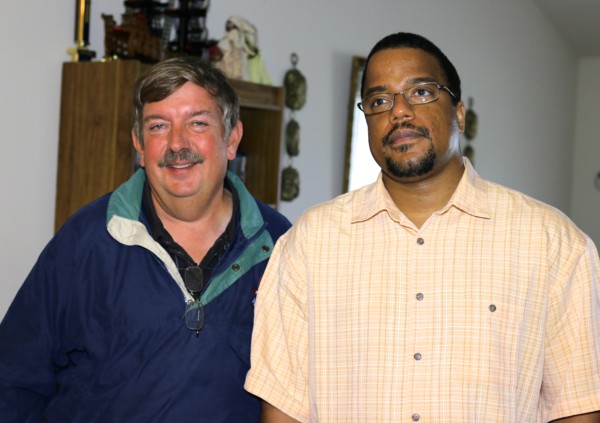 I met with Lonell Jones and Jim Rinehart, Assistive Technology Specialist at Easterseals Crossroads, at Lonell’s home in Fort Wayne, Indiana to learn about the assistive technology he is using that allows him to keep working.

I learned that Lonell was born premature. He told me that he was pronounced dead for twenty minutes. I learned that he had to spend days in an incubator where in the hospital pure oxygen was pumped into it and caused damage to the retinas in his eyes.

Lonell said, “In 1980, when I was 7 years old, I went blind for the first time. I had detached retinal surgery. In 1982, I went blind again and had to have the surgery again. In 1986, the same thing happened and after surgery I permanently lost sight in my right eye.”

Overall, Lonell has had 6 surgeries to reattach his retinas. His last surgery was in 2015. After that surgery, he had a severe case of pink eye. His eyes got very swollen and stayed that way for months. On July 4th, 2015, Lonell woke up and 95% of his vision was gone. On that day, he had plans to take his kids and the kid’s grandmother to the beach and to see fireworks. He told the kid’s grandmother that he woke up and was not able to see anything. Lonell was not able to visit his specialist since it was a holiday and did not want to go to the hospital. He told me he didn’t want to disappoint the kids so he went with them to see the fireworks. He said, “ I have always used my inner radar by listening to sounds of shoes and movement of someone’s clothing, so I just relied on my radar that day. The kids had a great time and the fireworks sounded great.”

He did go in to see the eye specialist later that week and they scheduled what would be his final surgery. This surgery was not successful in regaining any of his sight. During the time he was recovering from this last surgery, he visited The League for the Blind in Fort Wayne. The League for the Blind is an Independent Living Center that provides services to individuals with vision loss to assist them in living independently. Lonell said, “someone at the League told me, “Life will continue in some fashion after this and we can help you prepare for this.” They suggested that he go to Vocational Rehabilitation to learn about services that would assist him in continuing to work. Vocational Rehabilitation is a state agency that assists individuals with disabilities in obtaining or retaining employment. Vocational Rehabilitation referred him to have an assistive technology evaluation at Easterseals Crossroads. This evaluation is a one-on-one evaluation to determine an individual’s assistive technology needs so they can live and work independently.

When we sat down to talk, Lonell and Jim discussed their first meeting together. Jim said to Lonell, “you were in a pretty dark place when we first met.” Lonell said, “I was really depressed. I thought, “okay I’m going to get these services, but what am I really going to be able to do?” Jim learned during that evaluation that Lonell got his real estate license in 1997. He had been selling homes and then expanded into selling commercial properties. Since loosing his vision completely, he was not able to show people properties. He also could not access a computer to see real estate listings or read property documents.

Lonell said, “I didn’t know how I was going to provide for myself, let alone my children. I had been running from the same demon since I was 7 years old. When I completely lost my vision, my world shrunk. I felt very isolated. I wasn’t even sure how I could live independently, let alone work. I needed to learn how to prepare food, and do basic activities of daily living like washing clothes. It was killing my spirit. I thought if I can’t take care of myself, how can I take care of my kids?”

Lonell said, “When Jim came to visit he asked me what my day to day duties were when I was working in real estate. He told me that it was easier to keep someone in an industry that they are familiar with.” Lonell told Jim all of his job duties and Jim learned that access to a computer and reading documents were the biggest obstacles that Lonell faced. Jim told me that he quickly learned that Lonell was very tech savvy. Lonell told Jim that he spent most of his time doing customized marketing whether it’s for a home or commercial property.

Lonell said, “while working with Jim I realized I had to think differently about my industry and think about how I could do it in a different way.” Lonell knew he could not continue to sell housing because transportation was a challenge. He started to think about the commercial side of real estate and realizing that it’s a much smaller group of people who are doing commercial real estate and most of the work is done online he started completely focusing on doing commercial property.

With the goal of doing commercial property sales, Jim recommended assistive technology that would help Lonell be able to perform the job functions necessary to be successful. He first recommended a Ruby HD, which is a 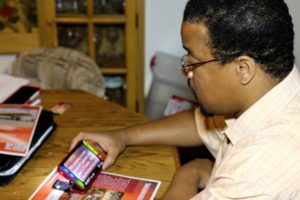 handheld magnifier that can help him view printed material. Lonell is still able to see some print with magnification. Lonell uses a basic handheld magnifier with a light on it to see who is calling on the phone and to be able to sign documents. Jim recommended a PENfriend, which is an audio labeler for people with visual impairments. It allows you to record a description, label an item, and then the device will 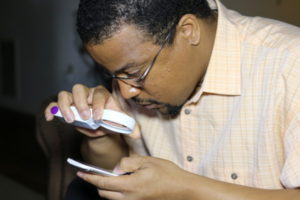 audibly read the label that is put on an object. Lonell uses the PENfriend to label computer cords, medication bottles, and things in the kitchen. Lonell is also using a Da Vinci desktop magnifier to be able to magnify the print on property documents. To access his computer he is using Zoom Text that has a scan and read system. The software will read what is seen on the computer screen.

Since working with Jim, Lonell is now working full time as a commercial realtor. He does all of his work online. He had retained many contacts and has been busy doing high-end commercial real estate sales. This type of real estate is behind the scenes and does not require him to physically show the properties. He spends much of his time helping his buyers find properties and helping them understand the purchasing and selling documents. He helps people invest their money into a property.

Lonell reflected upon the past year of working with Jim and said, “He opened a door for me that I thought would be permanently closed. The day I met him was as low as I have ever been in my life. He, himself, brought me back from the abyss. My candle in the darkness had blown out and he brought a lighter and lit it again. With Jim’s support and the assistive technology he recommended I am able to work in a field I love and I know I will get back to the lifestyle I was accustomed to and I know I am going to exceed all of my goals.”

Lonell lost his vision, but not all of his knowledge or contacts in the commercial real estate industry. He now has deals in 15 different states and 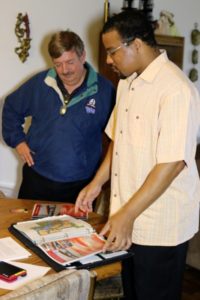 feels that he is even better at his job then he may have been if he had not lost all of his vision. Because he could not travel easily out of his home, he became single-mindedly focused and has now sharpened his skills in the commercial world. He plans to eventually get an office outside of his home and is excited about all of his impending deals. He said, “I am aiming for the stairs so I might hit the treetops. Lonell said, “Even people with disabilities, we can do big things. I plan to do big things and it’s because of Jim and Easterseals that I now have the tools to be able to accomplish my goals.”