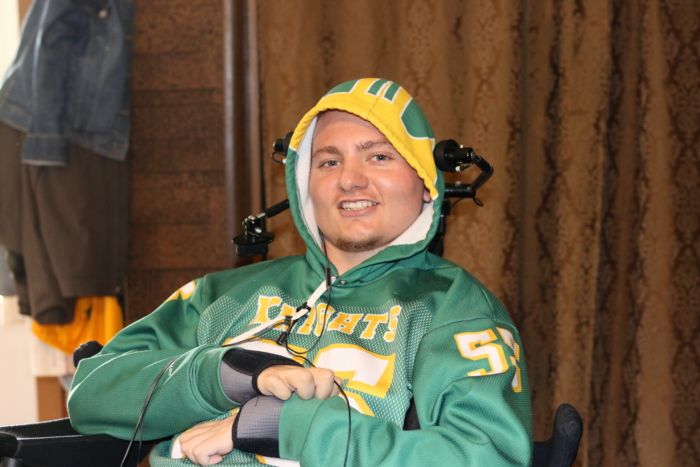 It was an unseasonably cool and foggy day in May when I drove through a very small town that consisted of a small post office, corner store, and one church. I came to this small rural Indiana town called Webster to meet Austin McNew who has lived here his entire life. I visited Austin to learn about the assistive technology he has been using since becoming paralyzed in January 2016.

Austin was injured in a sledding accident on January 12, 2016. He was a junior at Northeastern High School when he became paralyzed from the shoulders down. He told me that it was the only snow day his school had all year and he decided to go “hillbilly sledding” with some of his friends. This was a tradition that he and his friends had where they tied a truck bed liner to the back of a 4×4 and pulled it through the snow while they rode in the bed liner. During this sledding trip, they went down a hill and the bed liner buckled and several of Austin’s friends landed on top of him when they came to a stop.

When he could not move he yelled out to his friends to get help and to them that he was “paralyzed.” Austin was taken to Reed Hospital in Richmond, Indiana. Due to the severity of his injury, he was flown to IU Health Methodist Hospital in Indianapolis. He learned here that he, in fact, was paralyzed. He spent 8 days in the hospital and months at Rehabilitation Hospital of Indiana in Indianapolis doing physical therapy to work on core strength and using his shoulders. He was fitted for a wheelchair and then learned to use the switches on his wheelchair with his shoulders and head to be able to drive the wheelchair himself.

After spending some time with Austin, I learned that he was personable, intelligent, and very articulate. I learned quickly that we both had an interest in local sports and was thrilled to talk to someone who knew so much about local sports players. I remember throwing out a few names of local athletes to him and him giving me their statistics and way more details then I knew. When he was talking, I thought of a quote from a movie called Step Brothers where in the comedy two adults who just became step-brothers learn that they have some things in common and one says excitedly to the other, “Did we just become best friends?!” and the other says, “Yep!” and they high-five each other.

I could not believe the sports knowledge that Austin has about local through professional sports and I really enjoyed spending time talking with him. If you spend any time with Austin you learn he is a very intelligent kid, so it was no surprise to learn that he graduated early and was ranked 5th in his graduating class after returning to school after his accident.

After we spent some time talking about sports, we returned to talking about why I had come to visit Austin. I learned that Austin has a very supportive family and community. The community and school had many fundraisers to help him get a lot of the assistive technology he needed and to make his house accessible for him. He told me that his mom spent the entire time he was in Indianapolis with him and his dad drove up every night. Austin was able to return home in Spring 2016 and has continued to do weekly therapy. His parents have returned to work and his grandfather stays with him every day and takes him to therapy.

Austin told me prior to his accident, he was an all-state linebacker at Northeastern High school and when he was first injured he had very high hopes that he would be able to play again. He told me not being able to play football or drive has been the hardest part of his injury. He said when fall rolled around “it hurt me so much to not be able to play with my team.”

Austin is confined to a wheelchair and has the use of his head and shoulders. He is now using a lot of assistive technology to assist him with daily tasks. He is very tech savvy and we discussed accommodations that he required to finish high school and to continue on with his education.

When Austin returned to high school he had people assist him with taking notes and also to assist him in taking tests. Austin has a high tech wheelchair that he is able to control with head switches. He also uses Siri to email, text, and make phone calls on his iPhone which, for him, is much faster than using a head switch. He told me he does like to to be able to use the head switch if he wants to send a private text message or email instead of using voice dictation on Siri.

Austin decided to graduate from high school mid-term and had enough credits to do so in December 2016. He also had taken courses for college credit while in high school and has recently taken several classes at Ivy Tech where he plans to start full time in the fall.

When Austin was referred to Easterseals Crossroads he was assigned to work with Assistive Technology Specialist, Craig Burns. Craig met with Austin to determine what his technology needs were and evaluated what type of technology could help him increase his independence at school and home.

Craig learned that he had been provided some tools through the school and community. He was using a laptop computer with Dragon Individual Professional speech recognition software. However, there was some frustration with moving around the screen, accessing specific sites in the web browser and doing things outside of dictation. He also wanted to use the computer when he was not using Dragon.

Craig worked with Austin on Dragon Dictation and he is still actively working with him. Craig showed Austin two different eye gaze systems, but Austin did not like them and decided he liked using a head mouse instead. Austin told me when I left that Craig was going to bring out the new TobiDynavox eye gaze system to see if that one worked better for him. The PCEye Mini was used in combination with a Microsoft Surface Pro 4 tablet-style computer. That combination proved useful for much of his computing needs. It is mounted to the wheelchair so that it stays in the same relative position when he tilts his chair back. He also uses the Headmouse Nano along with Dragon. Austin can manipulate the mouse to the link he wants and say “mouse click” to activate the link.

Austin uses head controls to control his wheelchair movement and the 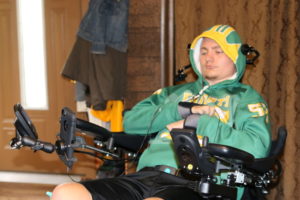 controls can be switched to controlling his other electronic devices using iDevice. iDevice is a product enabling connection and control of a variety of home devices, such as lighting, heating/cooling and other appliances plugged into the modules. It also connects with iOS devices. The 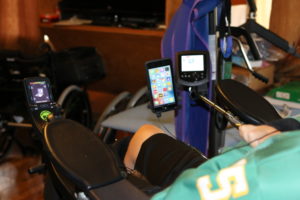 headswitch connects to not only be able to drive his wheelchair but to also use his iPhone. iDevice is a Bluetooth based communication module that enables a wheelchair user to control their iPhone, iPad or iPod Touch. Craig stated, “Austin handles new technology with ease and is very open to trying new technology.”

Austin said, “The most helpful technology is all the assistive technology on my computer such as Dragon Dictate. This allows me to get all of my schoolwork done, but my favorite technology is the iDevice that allows me to use my phone to socialize with texting and social media.” Austin also told me he also uses an Amazon Echo a lot. He had been dependent on asking someone to control the television for him and he can now use his Echo to change the channel or turn the television on and off.

Austin is excited to learn about any technology that can increase his independence. He will be starting college in the fall and he hopes to become a lawyer. He said he wasn’t sure what type of law he wanted to practice but has an interest in corporate, medical, and sports law.

Austin was also getting excited about an upcoming trip he has scheduled to travel to Germany for Stem Cell Therapy. He has never traveled on a plane, but says he is excited to go with a friend and his parents would be traveling with him to assist him on the plane and getting around. Stem Cell therapy is a treatment where stem cells are implanted in someone’s spine in hopes of restoring or repairing some of the spinal cord to regain some movement.

Austin is looking forward to increasing his independence every day with the help of assistive technology and physical therapy. He is becoming more independent and was excited that he was able to stay overnight with a friend for the first time since the accident without his parents. He was used to always being on the go and he is thankful that he is able to access social media to socialize and looks forward to going to school and getting out of the house more often. He said, “Not being able to drive, not being able to feed myself, and not being able to play football has been very difficult for me. I spend a lot of time watching sports, watching sports talk shows, and listening to music.” Austin discussed in more detail how much he misses being active and having social interaction. He said, “I miss fishing, working out, and just hanging out with my friends. People don’t mean to treat you differently, but they do because everything is different now. I won’t get invited to things I normally would because people aren’t sure if it would be accessible for me.”

I asked Austin if he had any advice for our readers and he said, “Always extend an invitation if any way you can make it accessible.” He went on to say, “Life is 10% what happens to you and 90% what you do with it. Positivity is key. Even when you have your dark days you need to remember why you’ve fought as long as you have. Look at the bigger picture and make the most of it. Your injury does not have to define you.”