Debby Elnatan’s son was diagnosed with cerebral palsy.  Upon his diagnosis, she was told by medical professionals that her son, Rotem, “didn’t know what his legs are and has no consciousness of them.”  She went on to explain her reaction and how it inspired her invention, the Firefly Upsee, which is now being launched worldwide: “…That was an incredibly difficult thing for a mother to hear.  I started to walk him day after day, which was a very strenuous task for both of us.  Out of my pain and desperation came the idea for the Upsee and I’m delighted to see it come to fruition.” 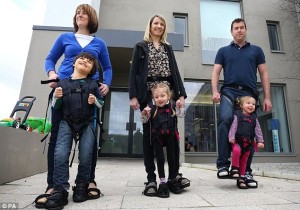 The Israeli mother searched for a company to mass-produce her invention, an invention that could transform the lives of countless children with disabilities.  She found a Northern Ireland-based manufacturer Leckey, which has a long track record in making equipment for children with special needs.  Designers, engineers, textile experts and therapists in Northern Ireland have been working on this project since 2012.  The result: the Firefly Upsee, which allows infants and small children with walking impairments to stand and achieve repetitive walking training with the support of an adult. 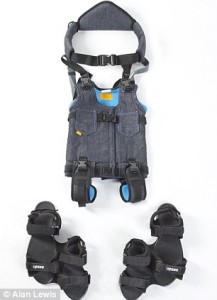 It includes a harness for the child, which attaches to a belt worn by an adult and holds the child in an upright position.  The product also includes specially-engineered sandals allowing the parent and child to step simultaneously, all while leaving their hands free for other tasks.  After successful trials with families in the United Kingdom, United States and Canada, the Firefly Upsee was launched globally this week.  For more information, visit the Firefly website here.