“Clothes mean nothing until someone lives in them.” – Marc Jacobs, American fashion designer

But for people with disabilities, living in their clothes can often be a more difficult challenge than you might imagine.

Making clothing accessible for everyone

Grace Teo, a recent Ph.D. graduate from MIT, got that real-life lesson during her clerkship at a local Boston hospital as part of her Ph.D. program. 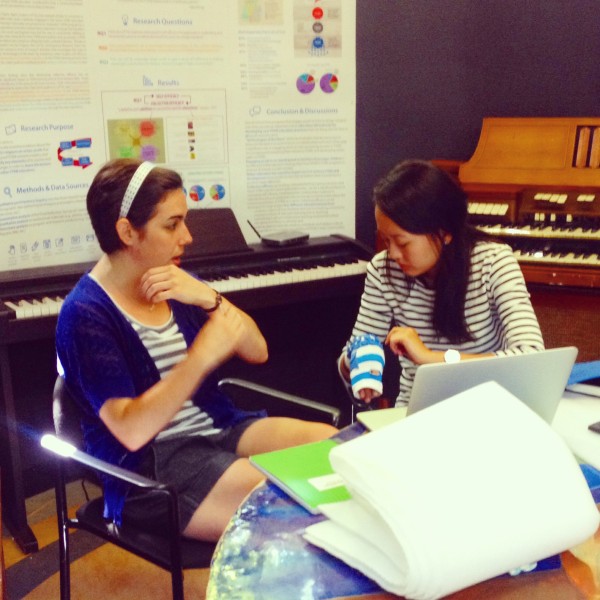 “I was interested in knowing which problems in the healthcare industry most urgently needed to be solved,” Teo said. “I asked a number of patients what they missed most about being healthy, and one of them answered ‘my independence.’”

The patient, who was dressed in starkly drab clothes, described to Teo everything she had used to get dressed that morning was currently on the floor at home because her husband, who usually helped her dress, was away on a business trip. Due to multiple sclerosis, she had lost some of her fine motor skills. This made it difficult for her to use common clothing fasteners like hooks, buttons and small zipper pulls.

“This encounter was a deeply memorable one for me,” Teo said. “I began to look more closely into the adaptive clothing market, and that’s when I realized the clothing options for people with disabilities are not only limited, but the aesthetics are also severely compromised for the sake of functionality.” Teo was concerned with how big an issue it actually is — living in a society where clothing is perhaps the most pervasive form of personal expression and social currency.

“Many social gatherings we attend have both spoken and unspoken dress codes,” she continued. “Not being able to dress for an event can effectively exclude a person from the event.”

And that’s why she wanted to make clothing and dressing accessible — for people of all abilities.

A new way to look at style

Teo received her Ph.D. in health technology and sciences, and she is currently a lecturer of “Principles and Practices of Assistive Technology” at MIT. And for the first time this summer, Teo launched a new program with Alice Tin, currently a first-year medical student at Brown University’s Alpert School of Medicine. Accompanying Teo and Tin’s efforts were their teammates, Kavita Raghavendran and Lea Yoon. 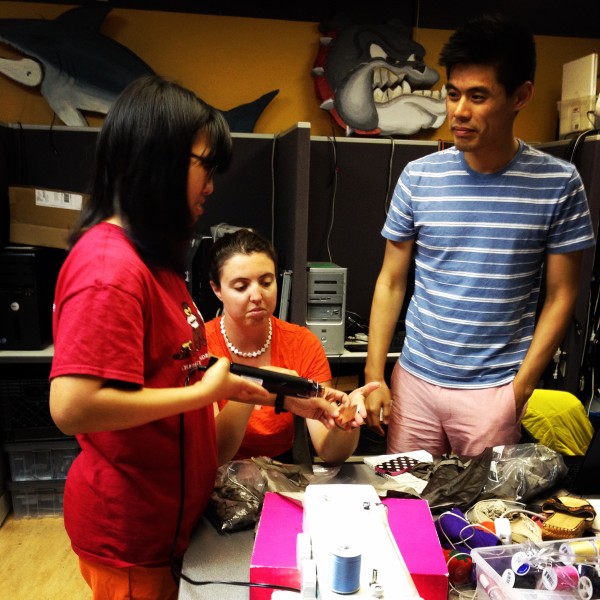 It’s called Open Style Lab — and it takes a whole new look at style through the eyes of a person with a disability. This special program is dedicated to creating innovative clothing solutions for people with disabilities, who often have difficulty dressing independently.

For this summer’s program, there were eight clients who had disabilities, including amputations, paraplegia and arthritis. Each client worked with one design student, one engineering student and one occupational therapy student. Open Style Lab sessions were held every Saturday for 10 weeks.

“In addition to benefitting from each other’s specific skill sets, the student teams were exposed to exceptional mentors and speakers from the fashion industry as well as academia, such as clothing designer Eileen Fisher, the Rhode Island School of Design, and the Spaulding Rehabilitation Hospital in Boston,” Yoon said. “Students were not only introduced to various technologies they could employ to make their products, but they were also introduced to panel discussions and industry speakers who shared their diverse experiences related to the field of disability.”

The final products included: a re-imagined rain jacket for a person in a wheelchair; customized protective sleeves for caregivers of children with autism; a magnetic clothing seam system for people with limited motor skills; and a voice-activated heating shirt, among others.

It gave Open Style Lab students the chance to not only design for clients, but also with them.

Challenge accepted: design for a need

“Each person comes with a fairly unique challenge, so the designing process becomes a very personal process,” Teo said. The garment industry standard of just using a fit model or mannequin no longer applies. And in Open Style Lab, students got to be in very involved conversations with their clients — finding out what obstacles they face on a daily basis and what their needs were.

With a wealth of personal experience with disability and, often, multiple ideas on improving clothing design, clients are an invaluable part of each team.

“Typical assumptions one makes about designing clothes must be reconsidered, and new factors need to be accounted for,” Teo added. This might mean extra pressure points created by clothing seams, the usability of common clothing fasteners by people with limited hand functionality, or zipper placement in pants to facilitate bathroom use while sitting down in a wheelchair.

For some, it may be that certain materials cause pain, or they can’t stand tags in the neckline of their clothing. They may have a lower leg prosthesis that’s hard to put a pant leg over. In addition, some people with disabilities are dependent on others for dressing, and making dressing easier for the caretaker must also be taken into consideration.

“We need to help improve communication and build empathy between designers and users,” Teo said. 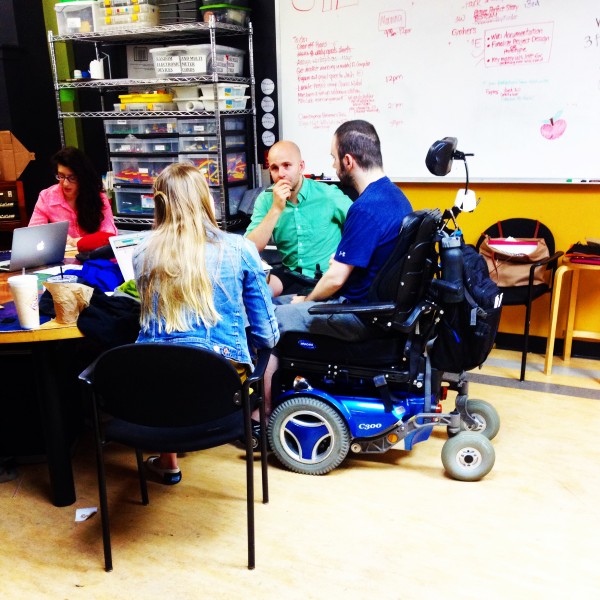 One of the clients in Open Style Lab was a young man named Ryan. He was a competitive biker and very adventurous until a biking accident in Spain caused him to lose all sensation and function from his neck down. One of the additional effects is reduced control of body temperature and the inability to sweat below the level of injury. Ryan is not able to sense how hot or cold he is — therefore putting on and taking off his jacket multiple times a day.

“Also, with the change in nerve function in his skin, even raindrops on his skin feel like needles,” Yoon said. “That means when it rains, Ryan needs to get a jacket on even faster. Unfortunately, because his arms are stuck in a certain position after his injury, it now takes him at least four minutes to put on his jacket — and that’s even with the help of somebody else.”

So what did his Open Style Lab team do? They created a jacket for Ryan with a zippered opening in the back to allow it to be slipped over his head in less than a minute. Ryan had also described himself as a “hoodie guy,” so when the team was figuring out how to protect his lap from getting wet in the rain, they designed a lap flap that, when not in use, looks just like a regular hoodie pocket. But when you bring the flap down, there’s a clear covering that allows Ryan to keep using his phone while still being protected from the rain.

And this is just one of the many projects that Open Style Lab created.

The merging of worlds shapes the future

“There is simply no existing platform for the world of medical engineering and fashion to communicate,” Teo said. “People in the fashion world are so far removed from people struggling with disabilities, and this is really where Open Style Lab hopes to shake things up.” And it certainly is doing just that. 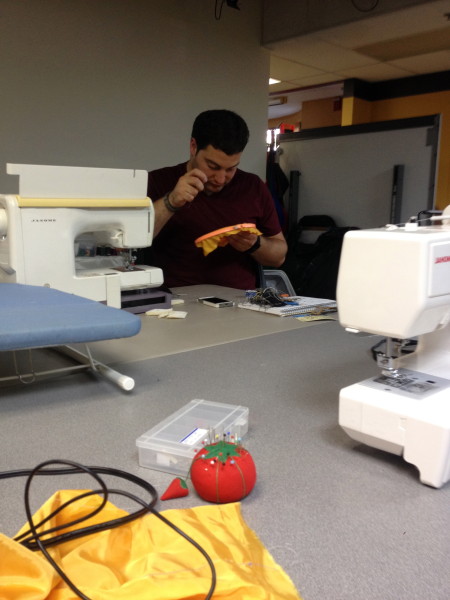 Beauty is pain and pain is beauty. Isn’t that how the infamous quote goes? It’s what women keep reminding themselves as they stuff and cram their toes into a pair of fabulous, yet way-too-high and agonizing high heels. Or you suck in your stomach with all kinds of body shapers to create that figure you desire at the expense of being able to breathe properly.

“We don’t usually think of fashion as something that should be accessible or necessarily comfortable,” Teo said. “We’re used to putting up with painful high heels because it looks good, or wearing long-sleeved business shirts for work on hot summer days because we have to. Somehow we have come to believe that with looking good, there must be some inevitable sacrificing of comfort and function.”

And society seems to still be grappling with even basic accessibility features in its built environment. That is why programs like Open Style Lab are so important in leading the way.

“The Americans with Disabilities Act was enacted in 1990, but it’s still only 24 years old,” Yoon said. “Installing ramps and making buildings accessible for wheelchairs continues to be an ongoing process that newer buildings comply with, but the compliance is often noted with reluctance and inefficiency.”

Not to mention the fashion world and its noted obsession with the ideal, or perfect, body type. No wonder people with disabilities have been neglected.

New York Fashion Week shows off international fashion collections to buyers, media and the general public. It consists of numerous branded events, including Mercedes-Benz Fashion Week New York and MADE Fashion Week, as well as numerous independent fashion productions around town. It is one of five major fashion weeks in the world, along with those in Paris, London, Berlin and Milan.

The most recent New York Fashion Week was September 3-11, and there was a special addition this year. Designer Carrie Hammer included a quadruple amputee in her show.

“We want to diversify the market for adaptive fashion, and we want to influence mainstream fashion designers to incorporate more ‘universal design’ principles into their clothing,” Teo said. Universal design is a design concept that aims to create products for all abilities — instead of products just for people with disabilities. 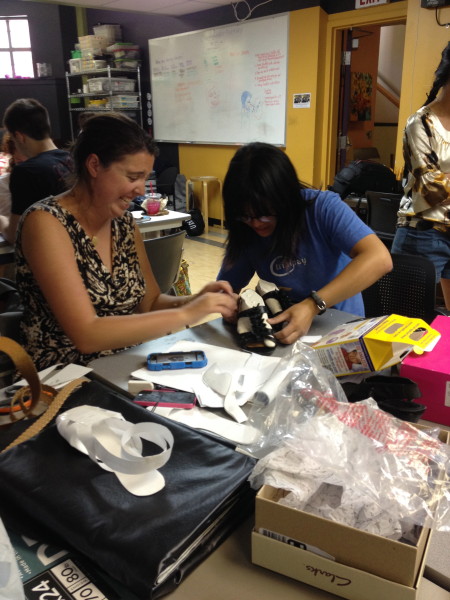 Their motto is: Creating clothes for people with disabilities. Open Style Lab does that, but it does so much more. Both Teo and Yoon, along with Tin, Raghavendran, and the rest of the Open Style Lab leadership, are looking forward to what the future brings for Open Style Lab and the world of fashion merging with engineering to create functional, accessible fashion.

“We’re really hoping to bring some of our more easily market-adaptable student designs from this summer’s program to the market,” Teo said.

During the program, students were mentored by leaders in wearable technology and adaptive design, immersed in workshops on developing a business plan and gaining skills to hopefully commercialize their designs.

And throughout October, teams are showcasing their designs publicly at the Museum of Science in Boston.