Smart devices have opened up a whole new world to individuals with visual impairments, granting them the ability to communicate, navigate in unfamiliar areas and even take photographs of their surroundings… Wait, what?

It is generally understood that individuals with visual impairments read and complete tasks oftentimes through the sense of touch; these individuals read content through Braille, an assistive, tactile aid invented in the 1820s, and feel nearby objects or faces in order to “see” what’s in front of them.  So, how could a smartphone or tablet with a flat, glass touch screen, ultimately lacking any texture, be of any use to an individual who cannot see?

It may seem counterintuitive, but these smart devices have been deemed by many advocates for the blind as the “biggest assistive aid” to come along since the invention of Braille.  People with vision problems can use a smartphone’s voice commands to read or write, they can determine the face value of a dollar through a camera app, navigate around town using GPS and compass applications and even take a photograph. 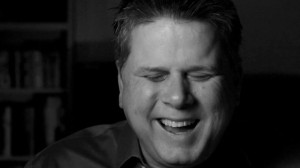 Apple’s devices feature VoiceOver, which the company says is the world’s first gesture-based screenreader and allows users to interact with their devices using multitouch gestures on the screen.  For example, if you slide a finger around the phone’s surface, the iPhone will read aloud the name of each application; swiping two fingers down the screen will prompt the phone to read the text of a selected app.  Apple’s features also allow people with visual impairments to take pictures.  For example, in assistive mode, the phone can say how many heads are in the picture and where they are in the frame, so someone who is blind knows if the family photo he or she is about to take includes everyone.

Google has been working towards increasing their assistive technologies on their Android operating systems.  The primary feature is TalkBack, a Google-made application that adds spoken, audible and vibration feedback to a smartphone.

Dorrie Rush, who has a retinal disorder and is the marketing director of accessible technology at Lighthouse International, a nonprofit vision education and rehabiliation center said, “We were sort of conditioned to believe that you can’t use a touch screen because you can’t see it.  The belief was the tools for the visually impaired must have a tactile screen, which, it turns out, is completely untrue.”

She went on to say that before the smartphone, people who were visually impaired could use a flip-phone to make calls, but couldn’t read on the tiny two-inch screen.  The first version of the iPhone allowed people who were losing their vision to enlarge text, but it wasn’t until 2009 when Apple introduced accessibility features, that the device became a benefit to blind individuals.

According to statistics from the American Foundation for the Blind, about 10 million people in the United States are blind or partially blind, and many experts predict that over the next 30 years this number could potentially double.

While creators of these mobile platforms aim to make their devices as accessible as possible for all individuals, apps further utilize these accessibility features.  For 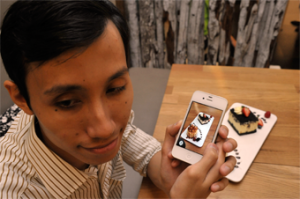 instance, hundreds of apps are designed to assist individuals with visual impairments.  There are apps to help people see colors by simply pointing their phones at an object like a banana, for instance, and the user would hear, “yellow green.”  Light detection apps can emit a sound that intensifies when someone approaches a light source, thus being helpful in finding an exit or locating a window.

In the United States, one of the biggest challenges for individuals who are blind is distinguishing the denomination between a $1 bill and a $100 bill.  Traditionally, many would depend on others to assist in organizing these in their billfolds accordingly, but now there are apps that allow blind individuals to identify the denomination themselves.

“Before a smartphone was accessible we had to carry six different things, and now all of those things are in one of those devices,” Rush said, “A $150 money reader is now a $1.99 app.  These devices are a game changer.”