Each year across America, many celebrate the beginning of summer on Memorial Day by grilling their favorite meats and relaxing outdoors with their loved ones.  To many, this may just be a three-day weekend to kickback while embracing the long-anticipated summer breeze; however, the final Monday in May signifies much more.

This federal holiday originally honored military personnel who died in the Civil War (1861-1865), but the holiday now honors those who died in any war while serving with the United States.  For both those who have served and/or those who have loved ones who have served, this holiday is a Day of Remembrance.  It is a reminder of the true cost of freedom, reminding the nation of the sacrifices made so that we may relax while embracing the sweet summer breeze.

More than one million Americans have sacrificed their lives for our country, dating back to the American Revolution  in 1775.  The following data provided by the Huffington Post.

From the above data alone, it can be deduced that this holiday is much more than a day of deciding what meats to grill and what frosty beverages to enjoy.

American heroes like Retired Army Staff Sergeant Travis Mills, formerly of the 82nd Airborne, remind all of us of the sacrifices made, and the importance of moving forward for those who gave their lives.

On April 10, 2012, Staff Sgt. Travis Mills was on his third tour of duty in Afghanistan when he was critically injured on patrol by an IED (improvised explosive device), and lost portions of both legs and both arms.  He is one of only five quadruple amputees from the wars in Iraq and Afghanistan to survive his injuries.

“How I survived, I have no idea,” he said.  “I was yelling at the medic, ‘Get away from me,’ because I thought I was done.  I wasn’t freaking out or nothing.  I just accepted the fact that this could be it.”  More than two years later, it is obvious Mills is far from being done.  He felt he had to keep going for his friends he lost overseas, and his beautiful daughter, Chloe, and wife, Kelsey. 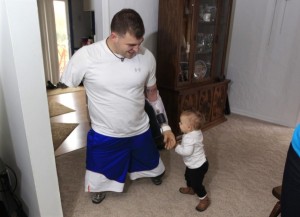 During an interview for CNN, Mills talks about assistive technology, specifically prosthetics, and how it helped him gain independence.  “Look at this technology–how neat is it?  You can lose both arms and legs and still walk– I’m running, I snowboard, I go downhill biking–it is wild.”  Mills also recently jumped out of an airplane with the U.S. Army Golden Knights parachute team.

The retired U.S. Army SSG spent months recuperating at Walter Reed National Medical Center in Maryland, the world’s largest military medical center.  His injury wasn’t easy for him to accept at first, “In the very beginning, seeing yourself, the new you is rough.  When I looked at myself in the mirror–I couldn’t do it for a while, just ’cause I mean, I got nothing left.”  When asked what he sees in the mirror now he stated, “Oh, this devilishly handsome, good-looking face.  I’m the same person, life’s just a little more adaptive.  Nothing I can’t accomplish or get through.”  Today’s assistive technologies offer many promises that were unavailable in years past.  Now, Mills and other amputees are able to excel in recreational activities and more.  Check out this exciting video of Mills in action!

Mills was dubbed the unofficial “mayor” of the Walter Reed Medical Center because he confidently goes around with his prosthetics and in his spare time, encourages other injured vets to never lose hope.  His motto is, “Never give up.  Never quit.”

In September 2013, he founded the Travis Mills Foundation, a nonprofit organization formed to benefit and assist wounded and injured veterans.