The soothing sensation of fine sand between our toes.  The breath of a warm, gentle breeze on our faces.  The comfort of a loved one’s embrace.  For the majority, these examples of touch take us to an unparalleled state of bliss.  But for children with sensory issues, such as those on the autism spectrum, these may prove to be anything but pleasant.

As stated in a previous post, children and adults with autism, as well as those with other developmental or neurological disorders, are often hyperactive, easily distracted and lack concentration.  This is often caused by an issue in their sensory system.

Further, when someone has a dysfunctional sensory system, sometimes one or more senses are either over- or under-reactive to stimulation.  For example, if you lightly tap individuals with an overreactive sense of touch, it could feel like an electric shock to them, and they may lash out violently.

Sensory problems may also be the underlying reasons for behaviors such as rocking, hand-flapping, flicking their fingers, and spinning.  This self-regulatory behavior is called stimming and happens for a few different reasons:

According to author Stephen Shore in Understanding Autism for Dummies:

“The average brain isn’t immune to such behavior; most people do it to up-regulate their brains in order to pay attention or to down-regulate when they feel too much anxiety.  Think of the possible up- or down-regulatory movements you may make while sitting in class or a meeting:

So what’s the difference between your movements and someone with autism?  Most adults have mastered ‘socially acceptable’ stimming behavior.”

Sensory integration techniques, such as pressure-touch, can help alleviate these issues.  Dr. Temple Grandin is a renowned scientist, author, and a major activist for autism.  She was diagnosed with autism and has experienced many sensory issues herself.  She is highly noted for promoting deep-pressure techniques after her experience in a cattle squeeze chute decades ago.

In her book, Thinking in Pictures: My Life with Autism, she explains how she always hated to be hugged, but always wanted to experience the good feelings of being hugged.  However, 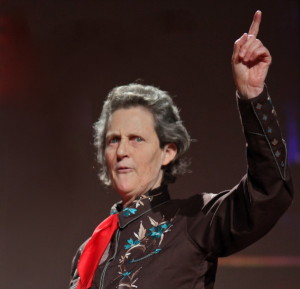 hugging was too challenging for her: “It was like a great, all-engulfing tidal wave of stimulation, and I reacted like a wild animal.”  She goes on to explain how many individuals with autism crave pressure stimulation despite their intolerance to touch.

Many autistic children seek deep pressure to become relaxed.  They often wrap themselves up in heavy blankets, get under sofa cushions and maybe even wedge themselves in tight places just to get relaxed.  This behavior was very strange to most individuals, but Dr. Temple Grandin began promoting the calming effects of deep pressure.

“I was one of these pressure seekers.  When I was six, I would wrap myself up in blankets and get under sofa cushions because the pressure was relaxing.  I used to daydream for hours in elementary school about constructing a device that would apply pressure to my body…

After visiting my aunt’s ranch in Arizona, I got the idea of building such a device, patterned after the cattle squeeze chute I first saw there.  When I watched the cattle being put in the squeeze chute for their vaccinations, I noticed some of them relaxed when they were pressed between the side panels…  a few days later, after I had a big panic attack, I just got inside the squeeze chute at the ranch.”

Once she was inside the chute, she asked her aunt to squeeze the sides against her and to close the head restraint bars around her neck, hoping it would calm her down.

“At first there were a few moments of sheer panic as I stiffened up and tried to pull away from the pressure, but I couldn’t get away because my head was locked in.  Five seconds later I felt a wave of relaxation, and about thirty minutes later I asked Aunt Ann to release me.  For about an hour afterward I felt very calm and serene.  My constant anxiety had diminished.  This was the first time I ever really felt comfortable in my own skin.”

After Dr. Grandin demonstrated the soothing effects of deep pressure for individuals with sensory issues, many professionals began developing pressure-applying products.  Here is a list of weighted wearables I discussed before. 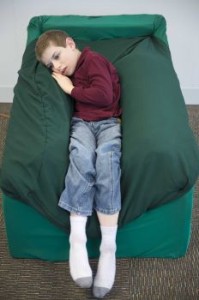 Though there are many products available, many are deemed clunky, noisy, ineffective and way too expensive.  Recently, engineering students at the Center for Advanced Professional Studies, rose to the challenge on creating a more affordable solution.

The students are working on testing and refining their two prototypes, the Sensory Chair and Sensory Lounger, (both trademarked).  They created the chairs using items like swimming-pool noodles, a papasan chair, inflatable air bag and a remote-control air pump.  Their device not only provides deep pressure to calm the user, but it is also affordable and looks like a regular piece of furniture.  It has such great versatility, it could work in the home or in an educational or clinical setting.