Individuals who have sleep apnea often don’t wear their CPAP masks as they’re supposed to.  This is likely due to the CPAP’s bulky mask attached to tangling cords and hoses.  However, soon there may be a hoseless, cordless, maskless, battery-powered CPAP device available for these patients called Airing.

First, what exactly is sleep apnea?  According to the Airing website:

Obstructive Sleep Apnea (OSA) is typically caused by a blockage of the airway when the soft tissue in the rear of the throat collapses during sleep.  Untreated, OSA causes a number of serious health problems including high blood pressure, cardiovascular disease, memory impairment, weight gain, and headaches.

The standard treatment for OSA is “Continuous Positive Airway Pressure,” or a CPAP.  While the CPAP machines may help, many patients don’t wear these machines due to their cumbersome design (50% of patients stop 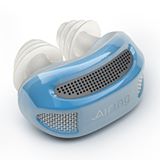 using the CPAP within one year.)

Stephen Marsh, the inventor behind Airing, a new type of CPAP, was working on an entirely different invention at the time, thus Airing is the “result of an incredibly happy accident.”  Airing is different from the traditional CPAP machine in many ways.

Here is an overview of Airing’s features:

The Airing device is still in its early stages and is set to launch a fundraising campaign on Indiegogo next month.

To receive the latest updates on Airing, click here.