Two teenagers from Duisburg, Germany have built a system which enables a wheelchair to be controlled by eye movements.  The two teens, Myrijam Stoetzer, 14, and Paul Foltin, 15, were inspired by the EyeWriter Project, which was built for Tony Quan by his friends.  In 2003, Quan was diagnosed with ALS and now cannot move any part of his body except for his eyes.  With the eye-tracking technology, Quan is able to create art.  And hopefully soon he, along with others, may be able to control a wheelchair with the affordable eye-tracking system developed by these teens.

The eye tracker product consists of a safety glass frame, a standard webcam, and IR SMD LEDs.  In order to make the webcam work in all lighting conditions, they removed the IR blocking filter.  Here’s more technical information provided by HackaDay:

The image processing is handled by an Odroid U3 – a compact, low-cost ARM Quad Core SBC capable of running Ubuntu, Android, and other Linux OS systems. They initially tried the Raspberry Pi which managed to do just about 3fps, compared to 13~15fps from the Odroid. The code is written in Python and uses OpenCV libraries. They are learning Python on the go. An Arduino is used to control the motor via an H-bridge controller, and also to calibrate the eye tracker. Potentiometers connected to the Arduino’s analog ports allow adjusting the tracker to individual requirements.

Further, the video stream from the webcam is filtered to note the pupil’s position.  Once filtered, the pupil’s movement is transfigured into four presets: forward, reverse, left, and right.  The presets can then be adjusted using the potentiometers.  An enable switch is manually activated to ensure the wheelchair moves only when commanded.  They plan to replace this switch with tongue 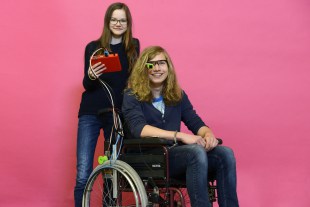 The teens recently placed first in a German competition; they also won a special prize since their project is an innovation for people with disabilities.

Further details on this project are available on Myrijam’s blog.  They have already documented their project in a German PDF, and are working on translating it into English so individuals will be able to build the system themselves.