Looking for an easier way to control your electrical appliances?  With the new iClick wireless control, you’ll be able to operate these appliances using switches and even your iPad!

The innovative iClick device allows users to turn electrical appliances on and off using either: 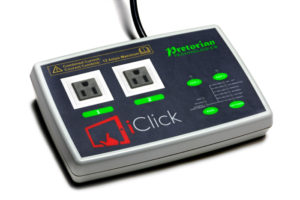 Plug your favorite appliance(s) directly into iClick to control them.  Once they’re plugged in, you’ll be able to control them in the following ways:

Features of the iClick wireless control: