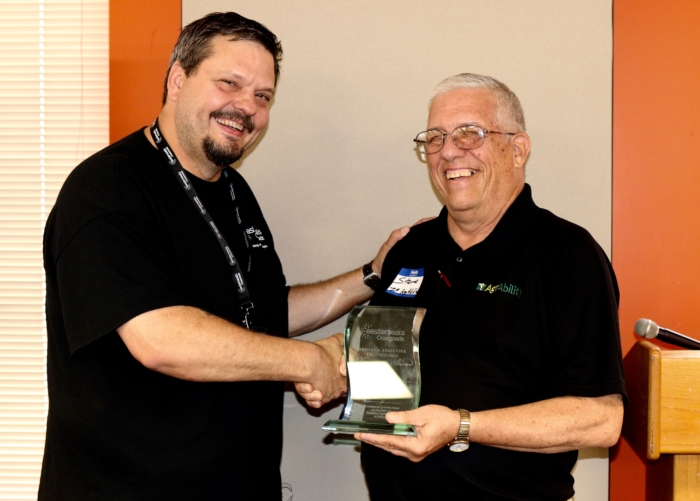 While looking back at when he started as Indiana AgrAbility’s rural rehabilitation specialist, Stephen J. Swain, ATP, let out a hearty laugh and said, “I really had no idea what I was getting into.”

Swain has family members with disabilities, but the world of assistive technology (AT) and the language of accessibility was foreign to him. Now he speaks it fluently.

“His technical knowledge and his ability to apply it to a wide variety of situations makes him invaluable to Hoosiers with disabilities,” said Wade Wingler, vice president at Easterseals Crossroads. He oversees the INDATA Project, a federally-funded statewide assistive technology program.

The INDATA Project partners with AgrAbility to serve farmers and other rural residents with disabilities throughout Indiana.

Earlier this month, INDATA surprised Swain with the AT Champion Award for his nearly 20 years of service in the assistive technology community.

Swain joined Indiana AgrAbility in the summer of 2000 out of a desire to connect to the rural community. AgrAbility helps to eliminate, or at least minimize, obstacles that inhibit success in production agriculture or agriculture-related occupations. 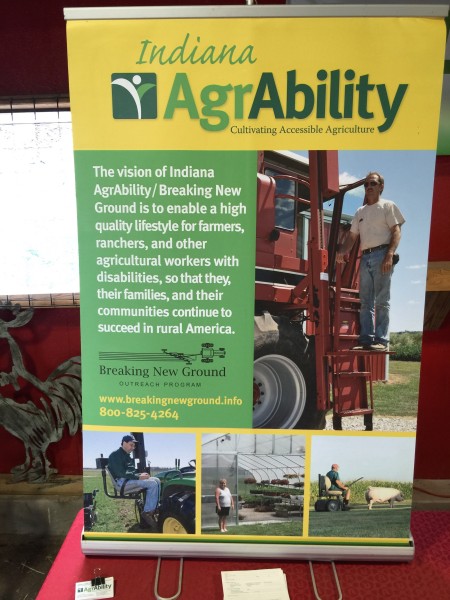 The heart of Steve’s work involves visiting farmers with disabilities and opening their eyes to the tools available to them. He conducts disability and accessibility assessments of farms, homes and businesses, and then develops reports on what is needed in each case.

The challenge often lies in developing a trusting relationship in which he can help people overcome their specific obstacles.

“Farmers are very independent,” Swain said. “When they have difficulty doing something, they usually figure out a way to do it. They don’t want handouts.”

However, when they see the technology available, they’re filled with inspiration — much like Swain was when he started. “I had a vague idea of assistive technology before, but this job took me to a whole new level of what’s possible.” 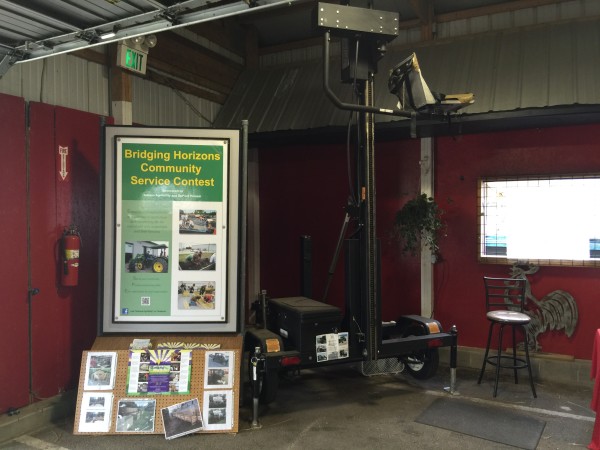 Some examples of what Swain calls the “more dramatic forms” of assistive technology are the devices developed for farmers with spinal cord injuries. Lifting platforms can pick them up from their wheelchair and place them right in the driver’s seat of their tractor. Auto-steer devices help them conserve energy and work for longer periods of time out in the fields. Automatic hitching devices allow farmers to hook onto equipment and subsequently detach from it without leaving the seat of their vehicle.

The rewards of rehabilitation

For Steve, the joy of the job lies in watching farmers go from pondering the possibilities of working with their disabilities to actually using the assistive technology on their farms. He loves seeing the technology serve as a beacon of hope for people in the midst of harrowing situations. 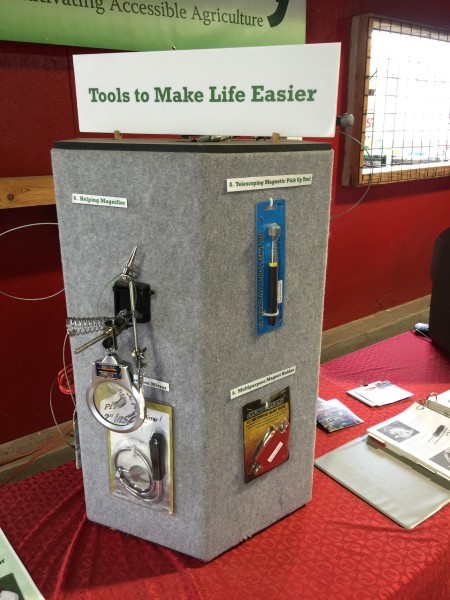 “When I first sit down with clients at their kitchen table, they often don’t see any way they can continue farming,” he said. “They just don’t know what they’re going to do. But when we show them some of the assistive technology devices available, you see the light go on in their heads. You see them think, ‘Yes, we can do this.’ To see that change and to see that they can continue is a huge reward. That’s the fun part of all this.”

Swain hears from clients all the time about how working with Indiana AgrAbility lifted their spirits and improved their lives.

“I got an email just last week from a lady who runs a dairy farm with her husband,” he said. “She asked if we have bumper stickers that she could proudly put on her car to advertise Indiana AgrAbility.”

Steve is also the assistive technology specialist for the national AgrAbility program. He helps promote Rehabilitation Engineering and Assistive Technology Society of North America (RESNA) certification to enhance the level of services being provided and coordinates the Assistive Technology Community of Interest for the program. 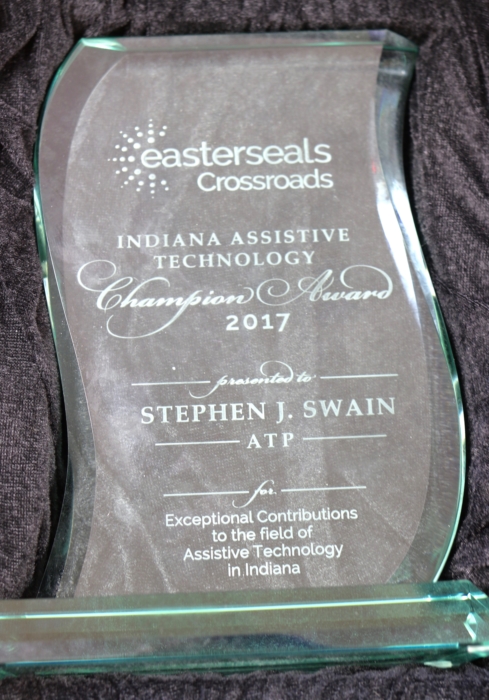 The assistive technology community beams with pride over the work Swain does, particularly the personal touch he adds to it. That’s why he was chosen for the INDATA Project’s inaugural Indiana AT Champion Award — for his exceptional contributions to the field of assistive technology in Indiana. Wingler, who was involved in choosing Swain for the award, praised the warmth Steve brings to his work.

“Steve is a strong collaborator who is reliable and kind,” Wingler said. “His gentle and genuine approach to assisting farmers, small business people and others is remarkable.”

Reaching out and reaching people

In addition to working with farmers one-on-one at their homes, Swain and his colleagues at Indiana AgrAbility raise awareness of their program and services at events such as the Fort Wayne Farm Show and the National Farm Machinery Show. And keep an eye out for the AgrAbility display at the Indiana State Fair later this summer. 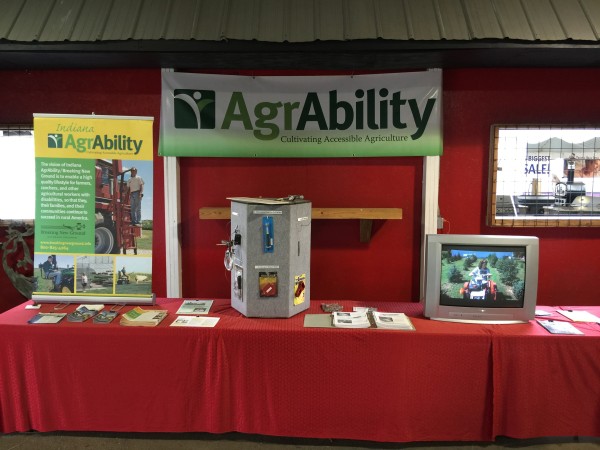 Swain also works closely with Purdue Extension, which organizes outreach efforts and educational opportunities with the university’s Agriculture and Natural Resources department. Indiana AgrAbility often turns to this group to network and find farmers in need of assistance.

“The Toolbox: Assistive Technology Database” is an online resource that contains assistive technology solutions for farmers, ranchers and other agricultural workers with disabilities. In addition to the database, there are several technical reports, providing techniques and suggestions focused on a specific topic on farming/ranching with a disability.

“We take broad strokes to connect with people,” Swain said. “And we appreciate all the opportunities we can get to spread the word about accessibility and assistive technology.” 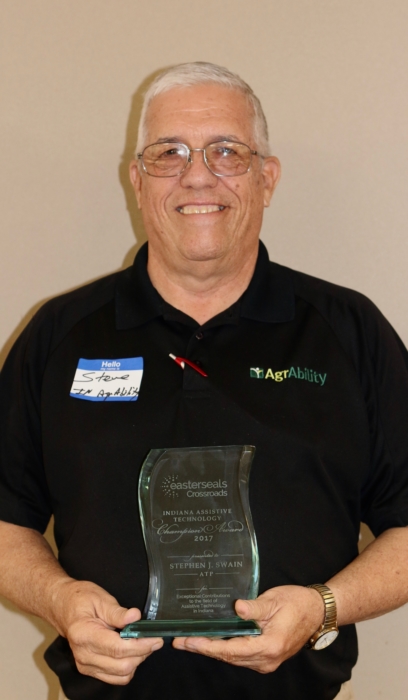 Swain is a true believer of this field. Before he started at Indiana AgrAbility, he admits he lacked the knowledge and took accessibility and assistive technology for granted. But now he sees how essential it is in our everyday lives.

“Just think about the automatic doors in the entrance of Walmart,” Swain said. “That’s convenient for an able-bodied person, but it means so much more to someone who has a disability.”

Swain is grateful to champion these tools and see lives change because of them.