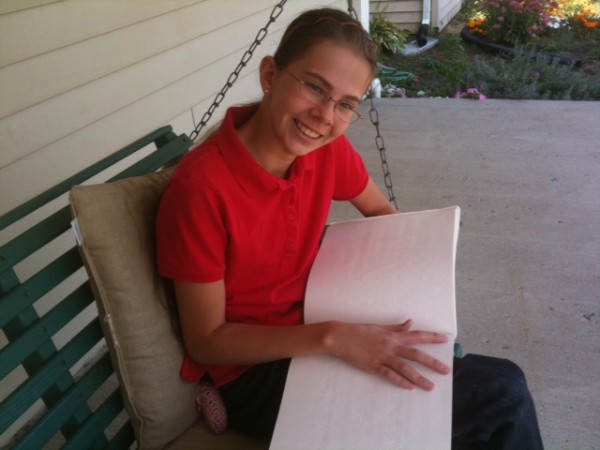 Ana Ganahl is not blind, in fact, she can see just fine.  So why is this 12-year-old today’s guest blogger?

Her curiosity for Braille came from her interest in service dogs; Ana taught herself the simple alphabet using house hold materials.  Yes, she taught herself.  Ana said she looks forward to having friends she can actually get to know, through Braille, as time goes on, raising puppies and eventually working with service dogs.  The following is her story.

My interest in service dogs first piqued my curiosity in Braille as I read stories of dog guides. I also read Louis Braille’s biography which caused me to want to learn more. Using index cards as paper, and a cutting board and sewing needle as slate and stylus, I learned the simple alphabet. My dad took me to the American Printing House for the Blind (APH) in Louisville, Kentucky, where I learned more about the history of Braille and obtained a real slate and stylus.

From then on learning Braille became much easier and faster. I began writing notes to my blind friend at church, Mrs. Stratton. She gave me a book on learning Grade 1 braille and became my pen-pal giving me notes of encouragement and recipes. I was able to borrow a brailler from Easter Seals, then I really took off! I was able to write much faster, similar to

the difference between handwriting and typing. I was also able to understand the letters better as I wrote them because I was writing them backward.

With the brailler, I continued to write notes and began copying a bible study into Braille for my friend. I also have a budding pen-pal at a nearby college. Soon I hope to have a brailler of my own to finish copying the bible study, copy church bulletins for Mrs. Stratton, write more notes to both friends, and continue learning Braille.  –Ana Ganahl, 12.

For more information on the American Printing House for the Blind, click here!