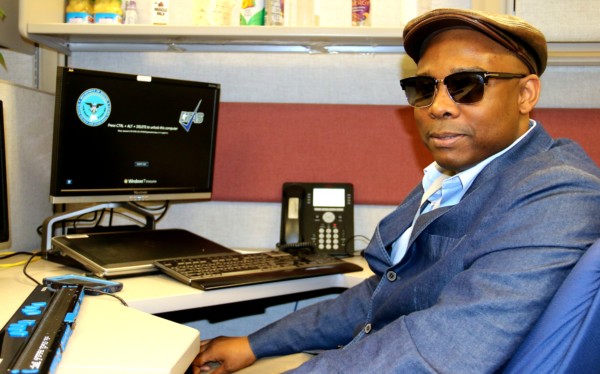 After handing over my driver’s license and going through metal detectors in one of the most secure buildings in Indianapolis, I was escorted to the office where Jywanza Maye works.

Jywanza worked with Belva Smith, Assistive Technology Specialist at Easter Seals Crossroads on a job accommodation and I visited him to learn more about the accommodations he had that allowed him to do his job.

Once I was escorted to the office area, I met Jywanza who was friendly, outgoing, and fashionably dressed. I learned that he was born and raised in Brooklyn, New York and loves clothes. I also learned that he started having vision problems at the age of 9. This is when he learned that he had detached retinas. He told me he was totally blind by the age of 16. Before becoming completely blind, he used some assistive technology such as a closed-circuit television system magnifier that would enlarge print. When he lost all of his vision in high school, he learned Braille. He also learned JAWS, which is a computer screen reader for people with visual impairments.

When Jywanza was in high school, the resource center at his school assisted him with any accommodations he needed. They also encouraged him to get involved with Vocational Rehabilitation. Vocational Rehabilitation is a government agency whose primary goal is to assist people with disabilities in preparing for, obtaining, or retaining employment. They assisted him with some of his needs in high school and throughout college.

Jywanza then went to college at Bernard Baruch College. During college, he did two summer internships in Washington, D.C. through a not-for-profit called The Associated Blind, Inc. In 2000, he worked for a U.S. Senator answering phones and doing administrative duties. In 2001, he worked for the U.S. Department of Transportation in the human resources department. Jywanza graduated in college in 2001 with a Bachelor of Business Administration. After graduation, he was offered a position with The Associate Blind, Inc. to become a recruiter to recruit college students who have visual impairments to do internships such as the ones he had done in college. He would recruit people all over the United States for internships in the Washington D.C. area. The internships were with both government agencies and not-for-profits.

When The Associated Blind, Inc. lost their funding in 2004, Jywanza started an internship with Goodwill Industries in Brooklyn, New York as a case manager and then was hired as a full time employee. He was responsible for helping people with disabilities find and retain employment. He did that for a year and a half when he got an opportunity with The National Industries for the Blind based in Virginia to do several 8-month fellowships all over the United States. He worked in the DC area, then Kansas City, Missouri, and finally he worked in Indianapolis for BOSMA Enterprises. He worked as an area supervisor working in the production area that employs individuals with vision impairments.  He worked for BOSMA Enterprises for six years and wanted new challenges and applied for his current job at The Defense Finance and Accounting Services (DFAS). Jywanza works as a Civilian Pay Technician. His job is to perform pay processing and review pay accounts for accuracy. Jywanza has been a Vocational Rehabilitation client in Indianapolis since moving here. They assisted him with transportation costs when he was looking for a job. When he found himself having some difficulty accessing the database with the JAWS software he was using, his Vocational Rehabilitation counselor referred him to Easter Seals Crossroads for an assistive technology evaluation. He was assigned to work with Belva Smith who is the Vision and Sensory Team lead at Easter Seals Crossroads.

Jywanza told me that he was relieved when Belva was able to come up with this solution to his access issues. He told me he appreciated how patient Belva was in working with him. He said, “She’s great. She is the best of both worlds because she knows JAWS like the back of her hand, but is sighted.” He said, “having both her sight and being an expert with the software makes her such an efficient teacher.”

It was so great to learn about Jywanza and the technology he uses to perform his job duties. I asked him if he had any advice for people about assistive technology. He said, “ If they are new to technology, I would tell them to be patient. It can seem overwhelming, but take a deep breath and take it easy.” He said, “ I would also tell people that there may be times they want to take it and throw it out the window, but be persistent and patient and they will get it.” He told me it was always helpful for him to read help forums and product help files.

It is always amazing to see the advances in technology and how assistive technology allows people with disabilities to be able to perform jobs they may not otherwise be able to do. Jywanza is a great success story of someone using assistive technology in the workplace and doing a job he loves. We wish Jywanza much success in his career and thank him for his advice and inspiration.