Okay guys, I am about to admit something I wouldn’t have willingly even 4 days ago.  Here it goes: I love Pokémon Go!  If you’re on any social media network, watched the news, or been outside lately, you’ve probably at least heard of the game, which is taking the world by storm.  On Saturday, I finally downloaded the game and began playing at my local park.  My friends asked, “Why, Laura?  It sounds so weird.”  I jokingly replied with: “Umm, I’m sure it can be used as assistive technology… somehow.  I just need to play to learn more so I can write about it for work.”  (In reality, though, I just wanted to play!)  Little did I know, I would actually be sitting here a few days later, writing about the benefits of playing Pokémon Go.

Assistive technology device means any item, piece of equipment, or product system, whether acquired commercially off the shelf, modified, or customized, that is used to increase, maintain, or improve the functional capabilities of an individual with a disability…

Now that we’ve briefly defined assistive technology, let’s learn what disability is defined as, as legally documented under the Americans with Disabilities Act.  Oftentimes, when one hears the term “disability” they automatically assume it refers to a physical impairment (e.g. individuals with mobility impairments, blindness, deafness, etc.) and/or cognitive disabilities (e.g. autism, Down syndrome, Traumatic Brain Injury (TBI), etc.).  However, under the Americans with Disabilities Act, psychiatric/mental impairments are also noted as disabilities.

Under the ADA, the term “disability” means: “(a) A physical or mental impairment that substantially limits one or more of the major life activities of [an] individual; (b) a record of such an impairment; or (c) being regarded as having an impairment.”

Further, the ADA rule defines a “mental impairment” to include “[a]ny mental or psychological disorder, such as… emotional or mental illness.”  Examples include:

How I Reached My Hypothesis:

Rewind back to this past Saturday, my friends and I began strolling through the park trying to catch some Pokémon and I caught my first one (Eevee, in case you were wondering.)  From then on, I’ve been hooked.  [Insert heart eyes emoji here.]  My friends continued to make fun, but then as we continued exploring this park on this warm summer night, they soon got into playing as well.  They’d say, “Oh, I think a Pokéstop is just over there by that sign!  Hand me your phone and I’ll go get the Pokeballs for you!”  I smiled and nodded to myself saying, “They love it too, it’s okay if they don’t admit it.”

As we continued, I noticed other individuals my age playing.  They asked, “Are you playing?”  I probably turned bright red and admitted, “Haha, uh, yes…I am.”  This was probably when everything changed.  They then continued to give me some tips and how they found such and such Pokémon over by this landmark, etc.  I instantly grew excited.  I said to my friends, “This.  Is.  Awesome.”  A calming sensation warmed my body as I realized I just bonded with complete strangers.  And then we continued looking for more Pokémon, Pokeballs, Pokéstops, etc.  Throughout the time playing, I probably met a dozen other amazing people.  I SOCIALIZED with complete strangers.  We bonded.  And I wasn’t mortified (as I so often am thanks to my crippling anxiety).

As I began talking to these individuals, they opened up to me saying how this game has benefited them.  One girl I met also has anxiety, but as we were comparing our Pokédex, I saw her light up.  Though I never met her in my life, I saw how the game was helping her overcome her anxiety.  “Yeah, I normally just stay at home, but this game has really motivated me to go outside of my comfort zone and it’s been a lot of fun.”

I also ran into a male who says he hasn’t been this active for years.  He was ecstatic to be exercising and to be outdoors exploring new areas.  “It’s just so awesome and fun,” he said.

Now just like anything else, I’ve noticed people are so quickly judging people for playing this “silly” game.  In today’s society, it is especially easy to judge.  Social media allows people to bully others from behind a screen.  But while playing this game, I’ve learned people from all walks of life are playing.  And bonding.

Most importantly I’ve learned we’re all human.  And it’s okay to have fun like a child!

Whenever any new product or service emerges, controversy is almost always guaranteed.  There are pros and cons to everything in this world.  Pokémon Go is no exception to this inevitability.

Here are a few opposing views to Pokémon Go.

1. Pokémon Go is not accessible for all players.

When I was reading this article, I fully understood where the author is coming from.  In sum, it argues that people with physical disabilities may not be able to play.  “Pokémon Go is limited for people with physical disabilities, and the physical requirements needed to play the game…—like moving around the environment to collect Pokemon, and walking a certain distance to hatch eggs—make it hard or impossible for some people to play.”

I understand the argument completely.  However, since I haven’t been able to walk for more than 20 years, I learned years ago: I won’t be able to do everything, and that is OKAY!  It’s okay for my friends to ride on bicycles, go jogging, skiing, and participate in other inaccessible activities!  It doesn’t do anyone any good getting upset.

Pokémon Go is no exception to this.  I understand I can’t necessarily go to the top of a rocky hill to capture Charizard.  We all have our limits!  And that is OKAY!  People are having fun and socializing like never before so I feel it’s important to focus on the pros.

2. People can get injured by staring at their screen while playing the game.

This argument makes me giggle.  If I had a dollar for every time someone walked into me because they are texting/staring on their phones, or just talking to a friend beside them, I’d be able to pay off my student loans.  (Okay, so that statement may be a little hyperbolized, but you get the point.)

Truth: yes, the game requires you to look at your screen every once in a while, but it will 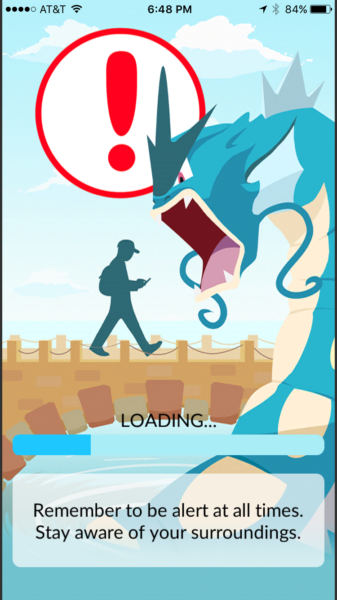 vibrate and sound when you’re approaching a Pokémon, Pokéstop, etc.  It doesn’t require you to be staring at your phone nonstop; if you gaze into the soul of your phone endlessly that’s all you, not the game’s fault.  As with everything, use common sense to avoid injuring yourself or others.  Don’t play while driving, riding a bicycle, hoverboard, surfboard (you know, if you’re into taking your phone into water for some reason) etc.  It’s just not a good idea.  When you first open the app it tells you to be alert of your surroundings at all times.  Use good judgment when playing.

This has been at the top of problems regarding the game.  When you first login, it prompts you to sign in using: (a) login information from Pokemon.com, or (b) Google credentials.

Adam Reeve noted that “when some iOS users sign into Pokémon Go through Google, they’re giving Niantic, the developer that created the game, full access to their account–that includes Gmail, Google Drive, Google Maps, Google Photos, and other Google features.  If Niantic chooses to do so, it has the ability to read your emails, send emails, and even view your search and navigation histories.”

*UPDATE: Niantic, the developer behind the popular game, wants players to know that it isn’t trying to spy on their Google accounts.

Now that we’ve covered a few of the opposing views of the game, let’s revisit and discuss the benefits of playing the game!

In order to play the game, it’s pretty much impossible to get very far without moving around–a lot.  In order to track and capture Pokémon (a rewarding, fun motivator in itself), you have to walk around a lot.  You also have to walk long distances (2 km, 5 km, 10 km) in order to hatch different Pokémon eggs.

Other physical benefit: It encourages fine motor skills as you have to aim and throw the Pokéballs to catch the Pokémon.

2. Encourages you to go outside and get some fresh air!

When was the last time you said, “Hey, I’m gonna go play in the park!”  If you’re like me, it was probably back in the 90s and early 2000s.  Yes, I’ve left my house and been outside over the years, but now I am especially motivated to leave my house, go to parks, go on walks, etc.  When you have anxiety and depression, you often don’t just go outside and play.  If you’re like me, you’d rather stay inside and watch television, play on the computer, etc.  This week I have been outside absorbing as much Vitamin D as I possibly can; I’m so motivated because I “Gotta catch ’em all!”

3. Motivates those with anxiety and depression.

This is the most important benefit I have noticed from playing the game.  Never, ever would I have expected a video game of any sort to encourage me to socialize and conquer my anxiety.  Now, this game is not a cure for major depression and anxiety, but it sure has helped ease my symptoms of both.  I believe the combination of fresh air, sunlight, creating a sense of camaraderie, exploring and just having fun have really benefited me personally the past few days.

Plus as I stated in the anecdotes above, it’s physically and mentally beneficial for so many other individuals.  Who doesn’t love fun things that benefit your health?!

The app is available to download for FREE on both iOS and Android devices.  So what are you waiting for?  Go out there and catch ’em all!