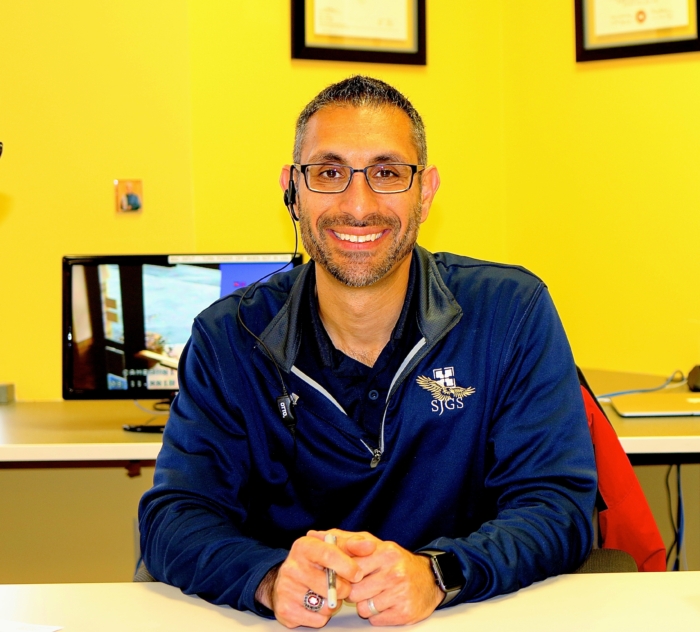 George is the principal at St. Joseph’s grade school. This is his first year as principal of the school. George taught biology in high school for four years. He then worked at a non-traditional school for three years. During that time, he decided to get his principal license at Bethel College in Mishawaka.

St. Joseph is George’s parish. When he heard that the Principal at St. Joseph was retiring, he applied for the job. George’s wife is also a teacher and they have four children.

George was diagnosed with Retinitis Pigmentosa (RP) in 1999 when he was in college. RP is an inherited disease that causes degeneration to the retina in the eyes. Night blindness is typically one of the first symptoms of the disorder. It is a progressive disorder and the degree of vision loss varies from person to person. Four to five year after college George’s vision became so bad that he had to stop driving and he was nearly blind by the time he was in his 30’s.

George had talked to a friend who told him about Vocational Rehabilitation (VR). VR is a state agency that provides services to people with disabilities to assist them in obtaining or maintaining employment. George went to VR to learn what services might help him in doing some of his job duties and he was referred to Easterseals Crossroads for an assistive technology evaluation.

Jim met with George at the school to learn about his job duties and what were his biggest obstacles in performing those duties. He learned that George’s biggest frustration was handling paper. He needed to read information passed out at principal meetings and other school documents.

Jim recommended the DaVinci HD Desktop Magnifier with OCR. This is 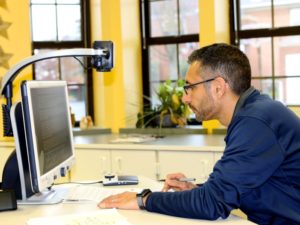 desktop magnifier that allows a user to put printed material under a camera and either magnify the print on the screen or have the document read by text to speech. George told me that he was thrilled to get the DaVinci. He said, “This is the best technology ever. It changed my life. It was an absolute game changer. I used to have to have my secretary read everything to me. It’s phenomenal. I can read all the documents that I need to read for school. I am able invert the colors of the document. I am able to see best with white text on black background.” George went on to tell me, “The best thing about the magnifier is I am now able to read the handmade cards I get from the students.”

George is also using an iPad Pro. He uses the VoiceOver feature to text and 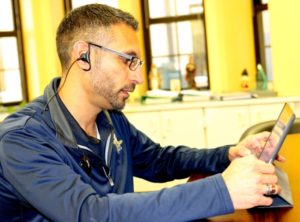 use email. The Voice Over is a speech to text feature that is standard on iOS devices. George told me that Jim had recommended the KNFB reader app. The KNFB app is app that takes a picture of printed text and it reads the print aloud. He tole me that has not had a chance to use it, but he is looking forward to using it to read books with his kids.

George has had a very successful first year at St. Josephs and tells me that all of his assistive technology makes his job much easier. He told me that he was very thankful for all of the assistive technology that Jim introduced him to. He said, “Jim is great. He is so good at his job. He really knows his stuff and is so responsive.” He tells me that he has learned so much through the assistive technology evaluation process with not only what equipment is available, but also unconventional ways of using them such as putting the iPad under the DaVinci magnifier to get even more magnification. He said he would not have known that there were so many options to help him do his job to the best of his ability had it not been for Jim.

I asked George if he had any advice for anyone who might be in a similar situation to him and he told me that he would tell someone, “Don’t be afraid of help. We all need help. Accept the help and don’t be too proud.”