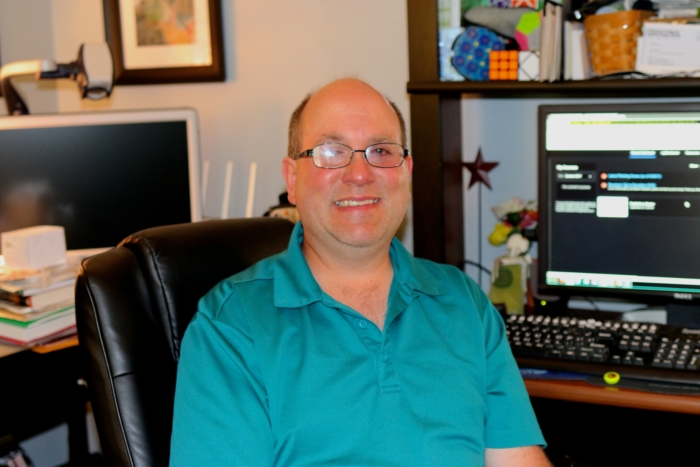 Dave was born in Michigan and has lived in northern Indiana area all of his adult life. He was born 2 1/2 months premature. Due to him being premature, he was kept in an incubator. While in the incubator Dave suffered from retinopathy of prematurity (ROP), which is a disease of the eye affecting prematurely born babies. The incubator pumps oxygen to a premature baby to help develop their premature lungs, but in some cases this process can cause unwanted blood vessels to grow on a baby’s retina which can cause the retina to detach from the back of the eye, leading to blindness. In the era that Dave was born, medical staff did not know that too much oxygen in the incubator could lead to blindness in children.

Dave had trouble with his vision throughout his childhood and had several surgeries to reattach the retina and keep his vision stabilized. He had 20/40 vision throughout his childhood and teenage years. Dave told me that he had a wonderful childhood and after he graduated high school he went to IU of South Bend. In college he had trouble seeing the board in classrooms. In 2002, he suffered several eye hemorrages had surgery at the Cleveland Clinic in the fall of 2002. He then had good vision for the next five years. In 2009 the neovascular glaucoma caused by the ROP worsened and he had further surgery at the Cleveland Clinic in the Spring of 2009. In August of 2009, he was diagnosed as being legally blind.

Dave was fortunate that a pastor at his local church invited him to come on the staff and he became the co-director of children’s ministry working on outreach and ministry events.

In 2010 , Dave and his wife went to Africa and started the adoption process of a little girl. In May of 2011, Fiona was adopted and came to the United States to live with them. Dave also has an 18-year-old son who is in college at Indiana University in Bloomington, IN. His son was in high school and they were in the middle of adopting their daughter when Dave completely lost his vision. Dave said, “In the midst of my struggle with losing my vision, I had a lot of blessings such as getting the job at the church and completing the adoption of our daughter.”

In 2013, Dave’s church had financial issues and he no longer had a position working there. In spring of 2013 , he and his wife started a not-for-profit Kuyamba Ministries to help families in Uganda. Together with their friends in Uganda, the not-for-profit does mission work. The mission is to assist families in the villages and slums and offer basic medical supplies such as bandages and first aid supplies , hygiene needs provide rice and sugar, and also spiritual guidance.

Dave told me that his job at the church started to get more difficult as his vision continued to decline. He said, “I was not able to see the kids faces or know who was standing across from me. It was hard to have confidence in approaching someone or do my job and the reality sunk in that I could not continue to do it all on my own. I was very sad. I missed seeing the kids and having the confidence to mentor them and get them excited. That was when I started to seek out what help was available to me.

When Dave had worked with Easterseals Crossroads in the past, he had low 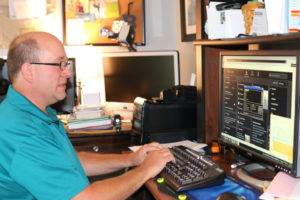 vision. He worked with Belva Smith, Assistive Technology Specialist at Easterseals Crossroads. Belva recommended that Dave use ZoomText. ZoomText is a magnification and screen reading software. Belva also recommended a DaVinci CCTV, which is a high performance desktop video magnifier. Dave was able to use this for his mail or a book and use either the magnification and contrast features or use it to scan and have the text read aloud to him. He said, “This opened my eyes to the world of assistive technology and the idea that I could still do things even though my vision was getting worse.”

Dave had been taking online graduate classes. He was in a program to get a Master’s of Christian Ministry and ZoomText was very helpful to him for the first year and a half of school. In the summer of 2015, he stopped taking classes because his vision declined to the point where he could not longer use a computer with magnification. Also, Dave had 3 consecutive surgeries in 2015 when the pressure in his eyes spiked and he completely lost his vision other than light perception. 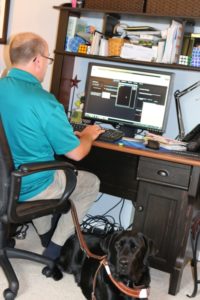 When his case was reopened because he lost all of his vision, Vocational Rehabilitation assisted him in getting a leader dog and training to use a cane. He went to live in Rochester Hills, MI for a week to learn cane training and then in June 2016 went to leader dog training for 3 weeks where he learned to walk with his dog in crosswalks, across streets, and at night. They trained him on using a bus and escalator. Dave said, “ The training ripped off stress layers that had taken away my confidence.

Jim determined that computer access was Dave’s biggest obstacle. Jim’s recommendation was JAWS17. Jim recommended JAWS because Dave was no longer able to use the magnification software he had used in the past. JAWS is a screen reader for people who are blind or have low vision. VR purchased this software for Dave and Jim worked with Dave over a 6-month period to teach him the commands and keystrokes in JAWS. Dave said, “I had never heard of this software. I was amazed that I could have everything on my computer read to me. Dave started becoming confident in using JAWS and was able to access the Internet. He now uses JAWS daily to access YouTube videos, Facebook, and his college website. 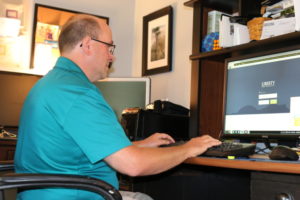 his vision and never thought he would be able to finish. After he learned the JAWS software, he realized that it was going to be possible to finish his online program through Liberty University. Dave said, “I thought The Liberty website and classes were a mountain I would never climb again. I could not wrap my head around being able to continue and now I can see a possibility of not only finishing my degree, but also being able to get into the workforce. The mountain became a hill and I saw the light at the end of the tunnel. Working with Jim taught me about all the possibilities I had ahead of me.”

Dave’s goal is to work again in ministry. It has now become a realistic goal with the availability of assistive technology. Dave is able to study and research to prepare for that job goal. Dave said, “Assistive technology and my leader dog have completely opened up my world again. Dave has jumped back into his classes and will complete his Master’s degree now that he has assistive technology that works for him.

Dave told me about some of the other assistive technology that is helpful to him. He uses a color identifier that allows him to know what color his clothing is so he can match his clothes. He uses a digital voice recorder to take notes. He also uses his iPhone a lot. He uses voiceover to have the screen read to him and uses SIRI to verbally compose text and email messages. Dave tells me that all the assistive technology gets easier with daily use.

I asked Dave if he had any advice for our readers about assistive technology and he said, “I would tell anyone who finds themselves in this position that you are not alone and there is help that will make your life a lot easier. What you thought wasn’t possible is with the right technology. There will be times you want to give up, but don’t give up because it is possible to be productive again.”

Dave said, “I felt so satisfied when I was working helping others. I felt as if I was changing lives for the better and then suddenly I felt that I would not be able to do it anymore. It was depressing that I couldn’t do the things I had done in the past. It was a change in my thinking that I needed to do things differently and learning about the technology available has given me hope and opened up my future. My heartfelt goal is to finish my degree so I can help others and it is now possible with the assistive technology I have incorporated into my life.