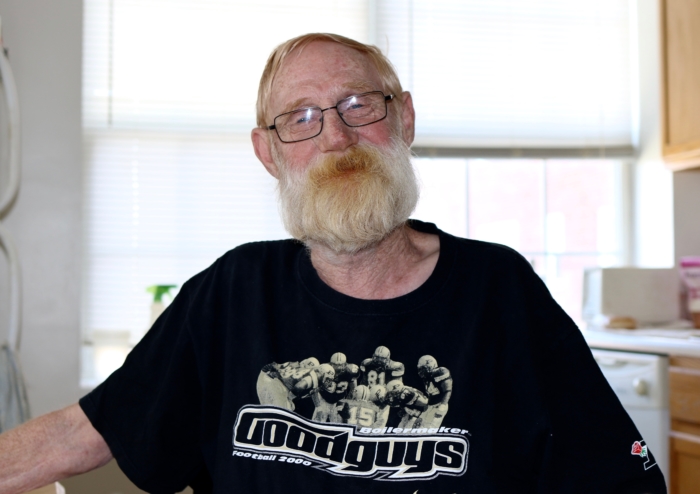 I met with Libbe in his downtown Indianapolis apartment to learn about his experience in receiving a computer from The INDATA Project’s computer reutilization program.

Libbe recalled coming through the immigration process in New York and he was wearing new leather shoes. He remembered them hurting his feet and he asked his mother to wear his wooden shoes that he was used to wearing. He remembers standing on a busy street corner in New York City with his mom and siblings while his dad went in to exchange money for American currency. He remembers how out of place they felt because the city was so big and busy and they could not communicate with anyone.

Their sponsor, who is responsible for helping immigrant families get settled until they become a U.S. citizen, had a farm in MN where the family would go live and work. They stayed in Hoboken, NJ for a short time because the farmhouse was not empty. They then went to Orange City, Iowa. It was here in Iowa where they found a stray dog that became the family pet and Libbe loved that dog and said, “it was the best dog there ever was.” They finally moved to Minnesota and all of the family worked on the farm. They had no running water and had to use an outhouse. Every family member worked the farm. The farm had corn, wheat, and oat crops.

They enrolled Libbe in school and they put him in Kindergarten instead of 1st grade because he did not speak English. They went to school in a 2-room schoolhouse. He recalled that he never wanted to take naps and his brother’s and sisters would be called in to try to get him to lie down.

He started to learn English in school and stated to teach his parents at home. The teacher suggested that he take home what he learned that day and teach his parent so he could practice and they could also learn the language. When he got a better understanding of the language, he would read the newspaper to his father.

In 1995, the family moved to Zionsville, Indiana and then to Pike Township, where his father worked in landscaping. Libbe was going to Pike High school and working part time when his father passed away. Libbe was close to the gentleman who operated the gas station where he worked and he told him that he needed to work full time to help support his family. The man who operated the gas station talked him into remaining in school. Libbe went to school for half a day and then would work in the gas station from 12pm-9pm. He did that for 2 years and then graduated mid-term. Right after high school, Libbe was drafted in the Vietnam War. He served two years in Vietnam and 1 year in Germany.

While he was in Germany he was able to arrange to see his “gran mama” who he had not seen since he was 5. He always remembered her fondly and had been very close to her when he was a small child. He remembered her telling him to “Never forget your father land or your mother language” right before the moved to the United States. His uncle contacted the assisted living home where his grandmother was living and told them her grandson would like to come visit her. They inquired about her health as she was now in her 90s. They told the staff that they would like to surprise her, but wanted to make sure she would be up for a surprise. The staff told them that she was in good health and that she would love the surprise. Libbe recalled that he walked in the door and she saw him coming. He said she got excited and knew exactly who he was even though she had not seen him since he was 5-years-old and he was now 20-years-old. He was able to visit her two times while he was stationed in Germany and he said it was one of the best things in his life.

After he served, he moved back to Indianapolis, Indiana. Libbe said, “I became a hippie and wandered around a bit. I always said I would never get married until I was 35 and I got married shortly before turning 35.” Libbe adopted his wife’s son and they had two daughters together. They were married for 7 years. Libbe worked construction for years and then had trouble finding work with the housing industry collapsed in the 1970s. His wife was working and he decided to join the National Guard. He then got a job at a hatchery picking eggs.

He then got a position at Lebanon High School as a custodian. He was then promoted to the athletic field director position where he was in charge of all the maintenance of the sport facilities. He worked that position for 20 years and then retired.

Libbe is hard of hearing. He told me that he had some hearing loss from ruptured eardrums as a child and believes that his hearing got worse during Vietnam and also due to a factory job that he had for a short time where he worked in a very loud environment. Libbe’s hearing has progressively gotten worse. He is not able to afford hearing aids. His hearing loss makes it difficult for him to communicate with people particularly on the telephone.

His primary means of communicating was using his computer and using social media platforms like Facebook. One day Libbe came home and his apartment had been broken into and they stole his computer. Losing his computer really limited his ability to communicate with people. He mentioned to a friend that his computer was stolen and he could not afford another one. His friend mentioned that he thought there was a place that could help him get a computer. Libbe called 211 Connect2Help, which is an organization that provides human resource referral information to assist individuals in remaining self-sufficient.

Through Connect2Help 211, Libbe learned about Easterseals Crossroads computer reutilization program. This program takes in donated equipment such as computers, CCTV’s, video magnifiers and other assistive technology devices and then sanitizes, repairs, and gives them away to individuals with a documented disability who live in the state of Indiana and can’t afford assistive technology.

Through this program reutilized computers are given away for free to individuals in need. People who donate the computers will get a receipt for tax purposes. Anything that cannot be refurbished will be taken to a local recycling company.

Connect2Help 211 informed Libbe about this program and Libbe contacted Easterseals Crossroads and spoke to Alvin Alviar, ReUse Coordinator. Alvin mailed Libbe an application. Libbe filled out the application with his documentation of disability. He was put on a waiting list and then contacted a month later to let him know that he had a desktop computer available to him. Libbe arranged to get a ride to go pick it up.

When Libbe came to pick up the computer, he met with Alvin. Libbe said, “Alvin was so friendly and helpful. He went over how to use the computer and gave me a list of resources that might be helpful. Easterseals Crossroads is a Microsoft Registered Refurbisher, which allows us to provide Microsoft Window and office software on all the computers that are provided. 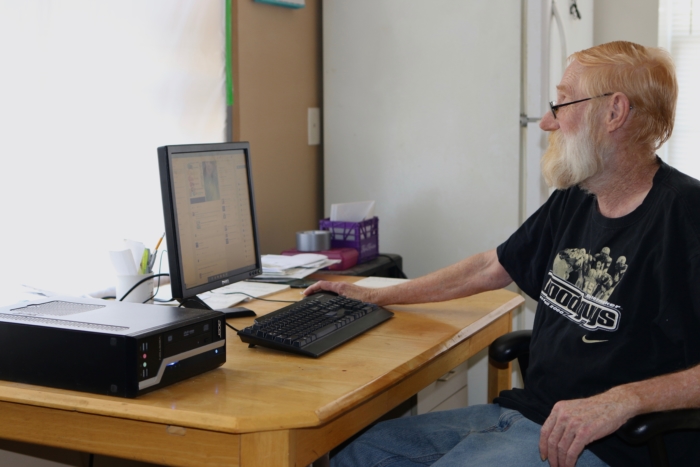 Libbe was thrilled to receive a computer and told me it allows him to communicate with family members all over including the relatives in the Netherlands. It is difficult for Libbe to hear on a telephone so the computer allows him to socialize with his community. He uses Facebook and email to keep up with his relatives and friends. He also uses the computer for a respite and enjoys playing Euchre on the computer to relax.