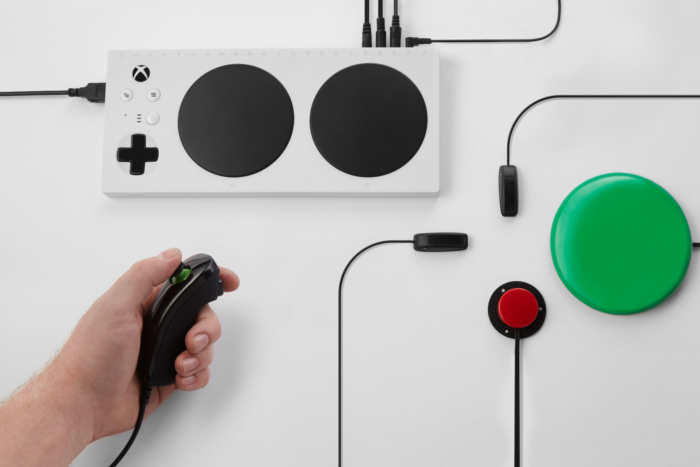 Individuals who are unable to hold a standard controller on a gaming system have had to turn to expensive custom solutions and required technical expertise to set up a controller that would adapt to their needs. Typical controllers did not take into account that someone might not be able to hit all the bumpers and triggers or hold a controller for an extended period of time. For those individuals, Microsoft has now created a video game controller designed for people with limited mobility. The Xbox One Adaptive Controller is designed for use with both Microsoft’s Xbox One console and any computer running Windows10.

Microsoft’s goal when creating the controller was to offer one that is accessible and affordable. This adaptable controller is customizable to support a wide range of needs for users who have a disability.  The controller will have 2 large buttons that can be operated using hands, elbows, or feet. The controller can be placed on a player’s lap, table, on the floor, or mounted to a wheelchair. This controller can be used out of the box or customized with third-party add-ons.

The controller has 19 ports where a player can plug in adaptive switches and other third-party add-ons. For individuals who have physical disabilities, adaptive switches allow them to activate and use technology devices.  There are many different types of adaptive switches such as a button switch, touch pad switch, foot pedal switches, one-handed joystick, mouth-operated switches such as a sip and puff switches, et cetera. These switches allow an individual with limited mobility in their hands to activate and control devices to access technology using their mouth, neck, chin, foot, or any other way they can access the switch.

The new Microsoft Xbox Adaptive Controller will allow a user to plug in add-on devices from third-party manufacturers with the various ports. It is wireless and has an internal battery that is charged via a USB connection. There is a headphone socket and the controller even has mounting ports, which would allow a player to fix the controller to a tripod and be able to mount to a table or wheelchair, which would provide easier access and stability for some users.

Microsoft’s accessibility team has been working on this controller since 2015. They took in consideration a wide variety of disabilities and worked with occupational and assistive technology specialists to fine-tune the final controller so everyone would have access to gaming.

Playing video games can improve problem-solving, boost creativity, provide entertainment and a social outlet for people. Individuals with a mobility impairment who may not be able to use a standard controller will now have access to gaming with the Xbox One Adaptive Controller. A controller that can be customized to play a game entirely with you feet, mouth, or other switches opens up the gaming world to so many people who were unable to play with a standard control. It will eliminate the need for these users to have to turn to expensive adapted solutions and is one more positive step in the world of inclusion. The Xbox One Adaptive Controller will be available later this year at Microsoft for $99.99.