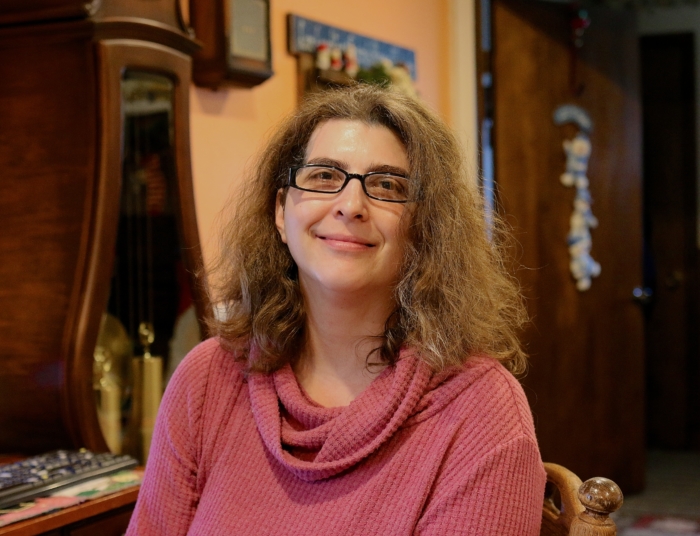 It was a cold winter day when I visited the home of Billie Rippy in Mishawaka, Indiana to learn about the assistive technology she has been using so she can go to college.

Billie’s mother greeted me at the door and she took me in the kitchen to meet Billie. Billie is a very warm and friendly person and she invited me to sit at the kitchen table near her desk.

I asked Billie to tell me a little about herself and I learned that she was born in South Bend, Indiana and lived most of her life there and moved to Mishawaka in high school. During her junior year in high school, Billie got pregnant and had her first child. She continued to go to school part-time and worked part-time. She graduated from Mishawaka High School and then got a job at Forest River factory. When she was 22, she had her second daughter.

She continued to work at the factor where she worked as a final finish inspector inspecting the fiberglass for RV trailers. In 2013, she woke up with a dull headache. Her left arm went numb for a bit, but she regained feeling. She at one point thought about seeking medical attention, but was not sure if she should. She then drove a friend home that was visiting and on her way home she had a stroke and her car went off the road and hit a telephone pole, tree, and electric box. She later learned that the stroke was caused by an aneurysm.

Due to her injuries, Billie had a craniotomy, which is a surgery where the surgeon cuts an opening into the skull and removes the bone flap to treat her aneurysm. The bone flap was replaced with a titanium plate. During her recovery, she had multiple infections and they learned that she was allergic to the titanium plate. She had to have another craniotomy to put in a plastic plate and has not had any infections since 2015.

As a result of the stroke, Billie had trouble with her speech, difficulty walking, and lost the use of her left arm, which she has names Lucy. I learned that Billie has a great sense of humor and likes to give a name to everything. Billie also suffered from vision loss and can only see shapes and shadows. She also broke her pelvic bone in the accident and had to have a lot of physical therapy to be able to walk again.

During her recovery, she worked with a neuro-ophthalmologist who referred her to Vocational Rehabilitation so she could learn what resources were available to her to increase her independence. Vocational Rehabilitation is a state agency that assists individuals in finding or maintaining employment. Vocational Rehabilitation first referred her to BOSMA Enterprises to learn basic daily living skills such as cooking and orientation and mobility (O&M) training to learn how to navigate in her surroundings. They also gave her some basic computer and she learned Dolphin Guide, which is a computer screen reader. Billie told me that she did not have luck with Dolphin Guide. She said, “It just never worked well for me.”

She was assigned to work with Jim Rinehart, Assistive Technology Specialist, at Easterseals Crossroads for her evaluation. Jim met with her in her home and 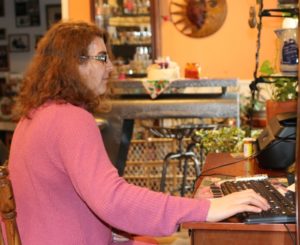 did the evaluation. He quickly realized computer access was her biggest hurdle. He recommended JAWS (Job Access With Speech), which is a screen reader software for PC’s that provides speech output and reads anything that is shown on a computer screen and a laptop computer that she could use and home and school. He would meet with her on Tuesdays and Thursdays to train her on using the screen reading software and she had a tutor that would help her study.

Billie said, “JAWS opened up a whole new world for me. I was able to do my homework independently and I have gotten all A’s in my classes since getting JAWS. Working with Jim has allowed me to be successful and he is so great to work with. He is really funny and just cracks me up. I don’t think there is any way I could be in school without his help and the JAWS software.”

Jim also recommended several other helpful assistive technologies such as the OrCam, the PenFriend, and a voice recorder. The OrCam is a wearable device 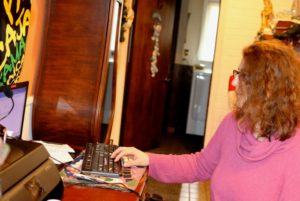 that attaches to glasses and assists individuals who are blind or visually impaired by reading out loud any text. It also recognizes faces and can identify products. The PenFriend is a voice labeling system that allows a user to label anything with an audio label that can be recorded in your own voice. Billie uses the PenFriend for many tasks such as being able to identify her books, identify her medications, and to read basic cooking directions so she can prepare her own meals. She also uses a 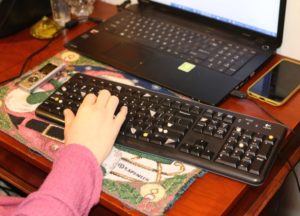 voice recorder in her classroom to record notes and to keep notes on how to use the different JAWS keystrokes. She said, “Jim and I spent hours recording notes on my new recorder so I would have them handy. I love having the recorder in class because I can sit back and really listen to the information instead of worrying about capturing all the notes. He also helped me with other tips like put stickers on my keyboard that would help me remember the JAWS short cuts. He is very patient and showed me so many things I never knew existed.”

Billie is currently a straight A student and taking 2 classes a semester independently. She is lucky to have her mom that she lives with and who can drive her to school. Her mom told me, “I’m very proud of her.” As her mom reflected on Billie’s accident she said, “I’m so happy she is still with me. She is my miracle baby.”

In July, Billie lost her oldest daughter to a drug overdose. Billie is still mourning the loss of her daughter and trying to regain her independence and says her faith in God keeps her going. Because of everything she has been through, she is interested in getting a social work degree. She would like to possibly work as an addiction counselor or become a vocational rehabilitation counselor to help people who have been through some of the things she has experienced and survived.

I asked Billie if she had any advice for our readers and she said, “I would suggest finding a good neuro eye doctor if you have a vision impairment and no matter what someone is struggling with I would tell them to stay positive. The hardest part is finding all the resources you need so stay patient as it takes time and can be trial and error. Also, if you can’t figure out a way to do something, call Jim. He will figure it out! You will need to be persistent and ask for help. I always remember the saying, “Tough times don’t last, but tough people do” and when I am overwhelmed I remember a saying a friend told me that “Inch by inch, life’s a cinch. Yard by yard, life’s hard. I’m just taking it inch by inch and with the help of assistive technology I hope to finish school and give back to others who are struggling.