The silver screen has given us many images of incredible exoskeletons used to fight aliens and crime.  One of the first exoskeletons was in a 1967 movie called “The Ambusher” which gave humans super strength to carry things.

The Power Loader then became iconic in the movie Aliens when Sigourney Wearer used the exoskeleton to fight the Alien Queen. In this sequel to the 1979 film Alien, Ellen Ripley (played by Weaver) returns to the planet where her crew encountered a hostile alien creature. 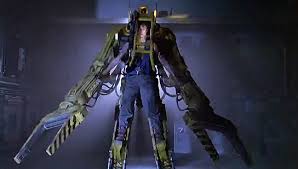 In this science-fiction horror film directed by James Cameron she was the only survivor of the space freighter Nostromo. She was rescued and revived after 57 years in statis (deep sleep). Ripley destroys most of the alien eggs and escapes the Alien queen only to find out that the Alien queen was stowed away on the ships landing gear. Ripley uses here exoskeleton suit, the Power Loader, to battle the queen and expel it into space. They then enter hypersleep and return to earth. 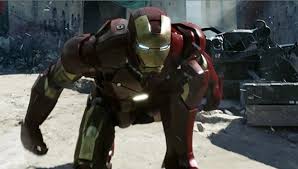 The Iron Man red and yellow exoskeleton from the 2008 blockbuster movie is possibly the worlds most recognizable. Tony Stark is a fictional comic book character that created the Iron Man armor suit. This suit first appeared in the Marvel Comics “Tales of Suspense #39” in March 1963. Tony Stark designed this suit after he suffered a life-threatening incident. The suit in this episode was grey armor with a chest plate designed to prevent the piece of shrapnel he received in Vietnam from traveling to his heart and killing him.  The trademark red and gold armor did not appear until Tales of Suspense #48 in December 1963. In the 2008 movie, Tony Stark wears the powered exoskeleton when he assumes the superhero identity Iron Man and uses the technology to fight against evil. The Iron Man suit has a self-contained environment with onboard weapons, super strength and the ability to fly and use radar and radio to communicate.

There are many live-action films featuring powered exoskeletons such as: Avatar, District 9, The Matrix Reloaded, et cetera and now exoskeletons are not just for fighting aliens and bad guys anymore! These robotic exoskeletons have now leaped from the silver screen to real-life adaptation. Soon every day Iron Men/Women will be walking the streets right here in the United States. The futuristic movie gadgets depicted in films have now become reality for paralyzed individuals to walk again. 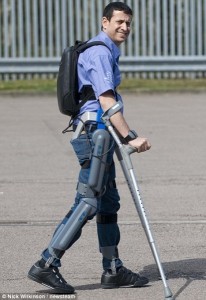 The robotic device is called the ReWalk. In 2013, Time magazine listed the ReWalk exoskeleton as world changing and one of the 25 best inventions in 2013 and now it has been approved!

Dr. Amit Goffer became a quadriplegic in 1997 after an ATV accident. This motivated him to create a solution to assist people in walking. He started Argo Medical Technologies in Israeli and created the ReWalk. The ReWalk Personal was designed for everyday use in 2012. It was available in Europe and on June 25, 2014 the FDA approved the suit to be marketed in the United States. This is the first ever exoskeleton approved for the disabled. This device is approved for use in the home and in the community.

The ReWalk Personal is a backpack with a fitted metal brace that supports the legs and upper body. It has a computer-based control system that stimulates the gait of walking legs for people who are paralyzed from the waist down. It is controlled by a wireless remote control that is worn on the wrist. This remote control allows the user to command the motion of the suit. The ReWalk is strapped to the users upper body and legs for support. There is a motor that is controlled by an on-board computer at the hip, knee, and ankle joint. To use the ReWalk a user needs to have full use of their arms and upper body as a user must be able to stabilize themselves on a pair of crutches as the exoskeleton carries them. This means that most folks with a spinal cord injury between T5 through L5 (spinal cord injuries where people still have use and control of their upper bodies) should be able to use the ReWalk. The ReWalk has a tilt sensor that detects motion. This tilt motion will assure that the foot falls evenly in several terrains. The tilt sensor will also function automatically by reading the user’s movements. If the user leans forward when they are sitting, the exoskeleton will bring them to a standing position. The ReWalk mimics regular walking patterns. The foot will hit the ground with the hell first and then the toes.

ReWalk does have the ability to allow users to climb stairs, but that has not been officially approved. According to their website, ReWalk is battery-powered and intended for all day use. It is currently “suitable for lower-limb mobility impaired adults who have functioning hands, arms and shoulders, as well as the ability to stand (healthy skeleton and cardio-vascular system)”. A physicians approval and training is also required .

There are two ReWalk products. The ReWalk Personal and the ReWalk Rehabiltiation wearable robotic system. The ReWalk Personal is for everyday use for individuals at home and in the community. The system is custom-fit for the user. It allows someone to stand, turn and walk. The person controls the system. They use the controls to determine when they want to sit, stand or walk. Dr. Amit Goffer says the goal is  “to give persons with lower limb disabilities, such as paraplegia, an experience that is as close to natural walking as possible”.

The studies of the ReWalk system have indicated other potential benefits such as improved cardiovascular health, loss of fat tissue, building of lean muscle mass, improved bowel function and additional psychological benefits. This thriving technology will eventually benefit an estimated 200,000 in the United States with spinal cord injuries and an estimated 1.7 million wheelchair users.

The ReWalk Rehabilitation system is used in a clinical environment. It is used for exercise and therapy as well as training an individual to become certified and eligible to purchase a personal system.

The major stumbling block to getting this technology out to the public is the cost of these devices. The home version of the ReWalk cost almost $70,000. These devices are highly innovative and funding will need to be the focus. It is unclear at this point if there are any insurance companies in the United States who will cover this device. It is the hope of the company that insurance companies will see how these devices could actually save them money if they factor in the medication and health issues that are avoided when using the ReWalk. Also the hope is they will eventually come down in price. Larry Jasinski, CEO of ReWalk stated, “ I’m hopeful that as these technologies come online, they do become more efficient and less expensive, like televisions and smartphones.

In March 2013, Israeli Army Veteran Radi Kaiuf and US Army Veteran Theresa Hannigan demonstrated the technology to President Obama when he visited Israeli. They are both parapalegics who now use the ReWalk to stand and walk independently. Sgt. Hannigan now trains with the ReWalk at the Spinal Cord Damage Research Center at the James J Peters VA medical Center in the Bronx, New York.

The ReWalk Personal System is available to people who meet the requirements that are determined by a medical examination and upon completion of the required training program. The company also offers maintenance and warranty programs for the system. There are currently three worldwide locations for Argo: one in the United States, a facility in Germany and another in Israel.

From the silver screen exoskeletons used for fighting off bad guys and now to the real world execution, the ReWalk gives individuals not only the power to stand and walk but also the ability to look someone in the eye, walk a loved one down the aisle, kick a soccer ball, stand to hug their loved ones, stand at the stove to cook, et cetera. Science fiction meets reality and hopefully improves the lives of many who are paralyzed or wheelchair bound.

Click here for additional testimonials from folks who have used the Rewalk.