Technology offers countless possibilities and opens doors many never even knew were closed.  Throughout the past several decades, advancements in technology have proven beneficial to the human race–both those with or without disabilities.  With technology, individuals who cannot walk are now able to get around in a powered wheelchair; those who could not speak can now communicate via AAC devices; and those who cannot hear are now able to communicate on the phone with friends and loved ones with the help of the forthcoming RogerVoice app.

RogerVoice is an app founded in France by Olivier Jeannel, a man who is deaf with over 80% hearing loss.  To communicate, many people who are hard-of-hearing rely on lip reading or sign language, but these two methods aren’t possible over a standard phone call. 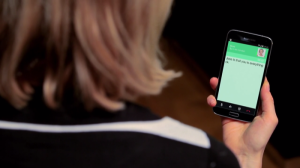 RogerVoice has been designed from the ground up for people who cannot hear on the phone.  To use this application, simply install it on your smartphone or tablet, make a call using the app, and receive instant live text transcriptions.  RogerVoice is the first mobile app that subtitles phone conversations in real-time, a feature that engages the hearing with the hard-of-hearing in exciting new ways.

The company has been working on the technology and the design for over a year, testing and getting feedback from individuals around the world. Sydney, the CTO stated: “When Olivier first told me his idea, at first I thought that’s impossible–there’s no way it could be done.  Well it’s incredible but we’ve done it.”  The goal is to make phone calls simple and accessible to all individuals.  Technology behind this app eliminates the need to rely on human intermediaries, making all calls private and confidential.

RogerVoice is currently being funded on Kickstarter and will be available to the public soon.