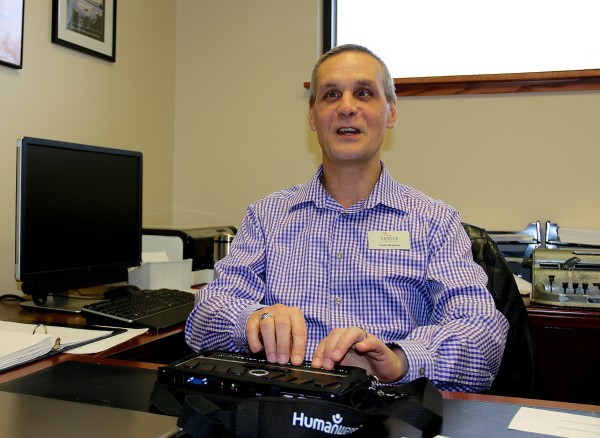 I met with Fred in his office to learn about how assistive technology assisted him in getting his dream job. He told me, “my story is almost a rags to riches story. I went from washing dishes to having my own office and a driver.”

Fred has been blind since birth. His optic nerves never fully developed. Growing up he learned to read Braille and had some basic Orientation and Mobility (O&M) training. O&M training teaches the Blind how to know where they are, where they want to go, and teaches them how to move safely from one place to another. Fred was in a mainstream school but had separate classes for kids who were visually impaired. He graduated high school in 1986 and then went to college at South Plains College in Texas. He earned a sound engineering degree and spent years running sound for local bands. He also played keyboards and guitar with local bands and would help friends do music demos so they could book shows. He really enjoyed this for many years, but since there isn’t much money in working in local venues he needed to do something else. He told me, “the lifestyle got old, so I came back to Indiana and started changing things around.”

When he moved back to Fort Wayne, Indiana, he connected with The League  to find out what services they could provide to help him become more independent. The League offers services to help people gain skills that increase their independence. At The League, he received several different talking devices, had computer training, and started using WindowEyes, which is a computer screen reader.

Fred then began volunteering at The League to get some office experience. He did that for 6 months until he decided to go back to school and started working as a dishwasher at Steak and Shake. During the time Fred was washing dishes and going to school, he began to work with Easter Seals Crossroads assistive technology specialist, Jim Rinehart. Jim worked on getting Fred up and running on his BrailleNote APEX 32 BTNotetaker, which is a free standing device that allows Fred to take notes in Braille. Jim indicated that he met with him once to show him the basic features and then Fred was off and running with the technology. They also worked on using Kurzweil 1000, a text-to-speech software, so Fred could scan and read hard-copy documents.  Fred is still going to school at IPFW College and is majoring in Interpersonal/Organizational Communication. He excitedly told me, “I am 12 classes away from graduating.”

During the time that he was washing dishes and going to school, he heard that a position might be opening up at The League and he contacted them and they hired him right away. He gave his notice to Steak ’n Shake, worked 2 more days, and was working at The League the following Monday. He shared with me that this job opportunity was “such a big thing for me.” As I sit in Fred’s office, I can feel how proud he is of himself and the great work that The League does for other people who are trying to be as independent as possible. Fred is the Senior Blind Services Coordinator. He works with people who are 55 years and older who have visual impairments or are Blind. He helps folks learn about resources that are available to them such as the Talking Book program and the NFB newsline. He comes to their home and assesses their needs and provides resource information. If people are interested in adaptive equipment, they can borrow it from The Leagues loan library and often they have donated equipment that they can give away.

He can help people get signed up for the talking books, help them set up basic living skills such as putting labelling dots on the stove and teaching them how to organize their clothes and food so they can be easily identified.

Fred uses several accommodations to get his job done. He has a part-time driver who is employed by The League who helps him go on home visits, run support groups, helps him get papers signed, and assists in showing people magnifiers and other equipment that they have in their loan library. He uses his BrailleNote as an output device that allows him to access web pages, emails and files from his computer. Fred also uses Window Eyes to read his computer screen and Dragon Naturally Speaking, which is a speech recognition software to input data. He is the self-proclaimed “gadget guy.” He loves technology and particularly loves his iPhone. He says, “it is very valuable to me.” He uses the VoiceOver accessibility feature on the iPhone to do emails and to create appointments in his calendar by voice commands. He also has a Book Sense Daisy Digital Talking Book Player to read documents. At school, he uses the Student Services digital books they provide to students with disabilities. Student Services either has digital copies of the books or will scan copies of books and turn them in to .PDF files. Fred then copies and pastes the .PDF files into Dropbox (a cloud-based file sharing storage site) and uses VoiceOver to read the text. 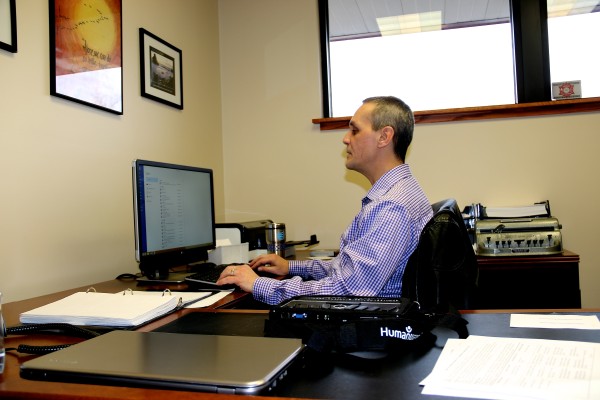 Fred told me he is “in a very exciting time my life”. He was just married in March, is thinking about buying a house, and sees the light at the end of the tunnel with finishing college. He said,“as much as I enjoyed music I needed to find my big boy job. I call this my career job. I am comfortable here and I really love coming to work.”

Fred wants to share his story so other’s may understand the value of assistive technology. He would like everyone to keep an open mind to technology. His theory is to “just do it.” He told me that he knows this is easy to say from where he is sitting now, because he was really scared of technology. “Was it easy?”, he says. “Not so much…. I still can have challenges and it takes awhile, but the payoff is unreal.” He shared that he was “scared of it,” but he wanted to learn how to be more independent. His advice to anyone out there scared of technology is, “use it anyway.”