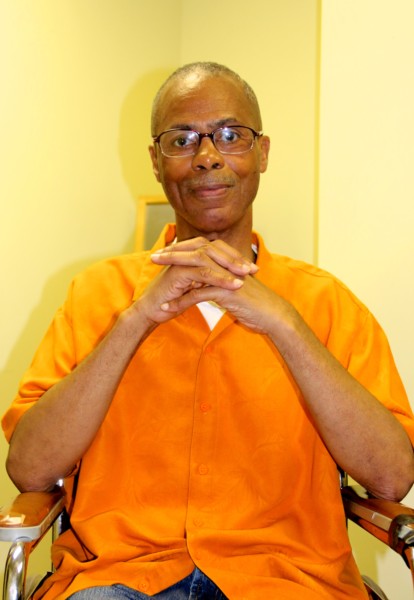 I met with Fred Christian to learn about his experience receiving a computer through the INDATA Project’s computer reutilization program. I visited with Fred at the offices of the Him by Her Foundation where he does volunteer work.

Fred told me he was born and raised on the east side of Indianapolis. He shared with me that in 2007 he was doing warehouse work when he started noticing that his left leg “wasn’t cooperating the way it should be”. He told me he had always been an active person who liked to play basketball, Frisbee golf, and enjoyed martial arts. He stated that he kept having trouble with his legs and his physician referred him to a specialist to find out what was going on. In October 2007, that specialist diagnosed him with Multiple Sclerosis (MS). Multiple Sclerosis is a disease of the central nervous system. Although all symptoms vary, most people with MS experience muscles weakness and difficulty with coordination and balance.

Fred’s symptoms all manifested in his lower extremities. It started with something referred to as toe drop where he had trouble walking and shuffled his feet and then he began to have balance issues. Fred started using a cane when his leg muscles became weaker. In 2013, he went from using a cane to using a walker because his balance had gotten worse. He is now using a motorized scooter and a manual wheelchair to get around.

Fred shared with me that he has no idea what MS was when he was diagnosed and had no idea where to begin finding resources to inform him about his disability. When he started looking for resources he learned of Vocational Rehabilitation. Vocational Rehabilitation (VR)  is a state agency that helps people with disabilities prepare for, find or maintain employment. Fred was assigned a vocational rehabilitation counselor to assist him in finding resources so he could become employed.

Fred expressed to his counselor his need for a computer and she informed him about the computer reutilization program at The INDATA Project. The computer reutilization program is a program where donated computers are accepted to be sanitized and repaired if necessary and given to people with disabilities in the state of Indiana free of charge. When he applied for a computer he was informed that he might be on a waiting list for a year. Fred told me that he was contacted within seven months to come and pick up a computer. He told me, “that is when I met this swell guy named Alvin”. Fred went on to tell me how much he thought of Alvin and how helpful he was in getting his computer set up and telling him about all the services at Crossroads. Fred said, “ Alvin is a very dedicated and loyal employee at your organization. He is very good at what he does. Not only with computers, but with people in the way he treats them and communicates with them.” He told me that meeting helpful people who shared resources gave him hope. Fred has five kids and he wanted to be role model for his children. In the beginning of his diagnosis, he noticed that many people with disabilities only get out for doctor appointments and live isolated in their homes. He believes that having a computer offers a way for people with disabilities who spend most of their time at home an option to socialize and find resources to assist them with their needs.

Fred worked with Vocational Rehabilitation to obtain employment. He landed a job with Goodwill and worked there for several years until the company had major cut backs and he could not get enough hours. He is currently doing volunteer work at an organization called Him by Her foundation answering phones and offering assistance to the attorney and paralegal who work for the foundation. The foundation, Him by Her, is an organization that provides life skills education to at-risk youth and adults who have become involved in the criminal justice system. The foundation offers vocational training programs to enhance an individual’s employability.

Fred told me that receiving the computer was a gift to him and allowed him to network with other people who had MS. He was able to find out information about support services and learn more about managing his disability. After receiving services from VR and The INDATA Project and learning more about his disability, Fred began to feel like he would be able to live life and not let his disability define him. He said, “ now it doesn’t call the shots in my life. I want to contribute to my family and show them that I can still be productive. I also want to be a support system to anyone else diagnosed with MS and help them find the resources I have learned about”.

It was such a pleasure to met Fred. His positive attitude came through in everything he spoke about. It was great to hear how he will be using the computer he received from the INDATA Project to help other’s find resources and support systems. We wish him all the best in all the advocacy projects he takes on in the future!

Click here for more information on how to obtain a computer if you live in the state of Indiana.