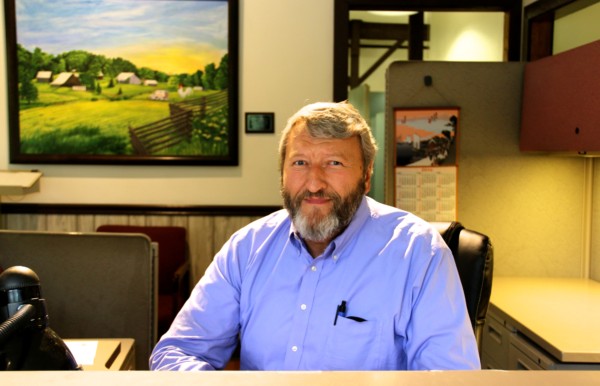 After traveling beautiful winding roads through farmlands, I ended up in the parking lot of Rose Acre Farms. I came to Rose Acre Farms to meet with Gary Bradley. Gary has been working with our Assistive Technology Specialist, Belva Smith, on determining assistive technology accommodations that will allow him to perform his job duties. I visited Gary at the farm to learn about him and what accommodations have been made to allow him to do his job.

When I walked in, I was greeted by a friendly man who was busily answering a constantly ringing phone. I soon learned this man was Gary. Gary works at the front desk answering phones and greeting people as they enter the office. Belva was with him to work on some job accommodations. In between calls, Gary told me a little about himself.

I learned that Gary had heart issues for several years. He told me he had Hypertrophic Cardiomyopathy, which is a disease where the heart muscle become abnormally thick and makes it hard for the heart muscle to pump blood. After many different treatments, Gary went on a heart transplant list in 2014. While on the waiting list, Gary got very ill in June 2014 and went to the emergency room. During that time they put an artificial pump in his heart. In September 2014, a heart was available to him and he had heart surgery. During the surgery, Gary had several complications. He lost a lot of blood and his blood pressure got very low.

After surgery, Gary was in a coma for nine days. When he finally awoke, Gary was unable to see. Gary said his wife asked him, “Don’t you see me?” and he replied, “No. They are giving me something that keeps my eyes closed.” It was only when his wife told him that his eyes were open, that he first learned that there was a problem with his vision. He later learned that he had several strokes during the surgery that affected the optic nerve. This resulted in him losing his vision and having trouble with numbness in his right foot.

After being discharged from the hospital, Gary was sent to the Rehabilitation Hospital of Indiana (RHI) to regain his strength and have physical therapy to be able to walk again. Once he was able to walk again, he received services at Bosma Enterprises for orientation and mobility training. This training teaches individuals how to be independent after losing their vision.

Gary said his main goal during therapy was to get back to work as soon as possible. He originally hoped to be back at work by June 2015. While in rehabilitation, he spoke to the CEO of Rose Acres Farms and told him that he would like to come back to work if there was anything he could do. His employer was very supportive and asked him if he felt that he could handle answering the phones.

Gary had worked for thirty-four years at Rose Acres Farms as a Fleet Manager. 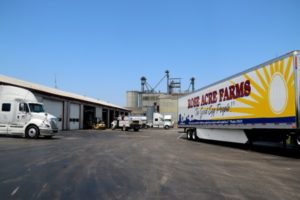 It was his responsibility to take care of all the vehicles and emergency generators used on all their farms. Rose Acres Farms is a family owed business that produces shell eggs and egg products. Their farms consist of: chickens that are cared for by in-house veterinarians and nutritionists, production facilities to package egg and egg products, and a fleet of trucks to deliver egg products. They have 17 facilities in six states. Rose Acre Farms is the second-largest egg producer in the United States.

Gary has always loved working for Rose Acre Farms and was thrilled to return to work in December 2015. He was no longer able to take care of fleet, but his 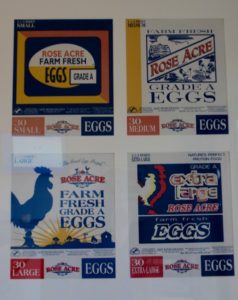 company offered him a position answering phones and doing customer service work. During his time of rehabilitation, Gary became a client of Vocational Rehabilitation Services (VR). VR is a state agency that provides services to people with disabilities to obtain or retain employment. Upon returning to work, Gary’s Vocational Rehabilitation Counselor suggested he have an assistive technology evaluation to figure out how he would most efficiently access a computer and a telephone.

His evaluation consisted of Belva visiting his place of employment to determine his needs in accessing his work area. They determined the jobs he would be doing and Belva recommended assistive technology that could make those tasks easier. She recommended: JAWS which is a computer input software that will allow Gary to use voice commands to access a computer, a pen friend, which is an audio labeling device used to be able to identify items, and a handheld voice recorder for Gary to be able to leave audio notes for himself.

Gary has been very successful in his transition to front office work. He has a 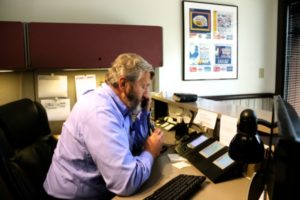 very friendly and calm demeanor and appears to handle a constantly ringing phone with ease. He told me that he has memorized around 250 phone extensions. Gary and Belva told me that the Rose Acre Farms staff has been very accommodating. Not only did they find a 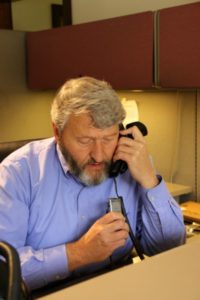 position to keep Gary on staff, they have been very supportive of anything he needs to excel in his position. They installed an alert system that will beeps every time the front door opens so he will know that someone has entered the building and he can then greet them and assist them accordingly and the IT department has been willing to work with them on any accommodations he needs.

Gary told me that he was never depressed over losing his vision. Belva said, “He has an ‘I can do’ attitude. I’ve never seen him in any other fashion.” Gary said, “I was so surprised that people got so depressed and were okay to just sit around and do nothing. How can you do that? As soon as I was out of PT, I could not wait to do something and get back to work.” He further told me, “I was not real hopeful I would find a heart for a transplant and would witness people passing away who did not receive one. So, I was grateful for the transplant even though I lost my sight, because I was alive. I never once said, “’Why me?’ I woke up and that was better than the alternative. I rely on my faith and my family.” Gary told me his very first thought was how he would be able to bail hay or mow.

He isn’t mowing these days, but he is living a full life. He enjoys going to church, baseball games, and the racetrack. He loves his job and spending time with his 14 grandchildren. He has a lot of support from home, church, and extended family.

I asked Gary if he had any advice for anyone after everything all he has gone through and he told me he would tell people to “get as much technology as you can. If you wonder what if I had this to help me, it probably exists.” He encourages anyone who has the physical capability to not sit around and dwell on what you can’t do. He also advises getting up and walking a few miles a day. He told me, “Of course, I’d rather see, but it’s not going to happen. I feel lucky to be alive and I make the most of it.”

It was a privilege to visit with Gary and visit the company where he is so proud to work. His positive attitude comes across in every call he answers. He is a great example of how a supportive employer and an eager employee equipped with assistive technology can get the job done despite obstacles!