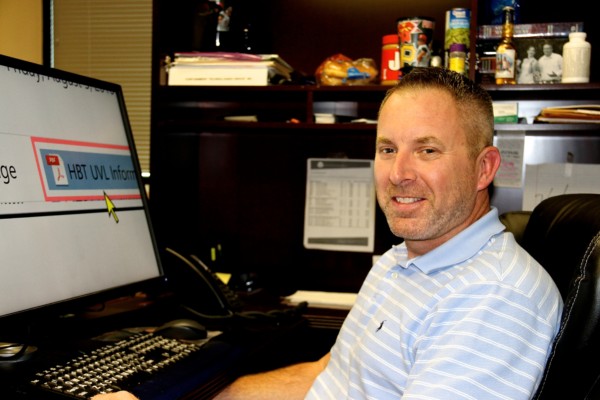 Greg lost his vision 18 months ago. He started to have problems with his vision right before he was getting married. Greg started visiting the eye doctor when he started having vision issues and the doctors could not figure out what was going on.

It was weeks before his wedding when he first started having trouble with his vision. At this time, he was working a lot of hours, getting married, and they were blending a family that consists of a total of five kids. The doctor told him to go ahead with his wedding and go on his honeymoon and they would resume testing when he returned. When he came back, he was blind in his right eye. He was then referred to a neuro-ophthalmologist. Approximately three weeks after returning from his honeymoon Greg had now lost his vision in his left eye.

It took doctors three months and numerous tests to figure out why he lost his vision so rapidly. They finally determined through genetic testing that he had Leber’s Hereditary Optic Neuropathy (LHON). LHON is an extremely rare genetic defect. The symptoms usually begin suddenly and within a few months most people have severe visual loss in both eyes. LHON is a rare disease. It is estimated that only about 100 people in the United States are diagnosed with this genetic disorder each year and it is believed that there are only about 4,000 Americans with LHON and 35,000 people worldwide.

From the time Greg started having vision problems, he continued to lose his vision for eight months. He was told that his vision has stabilized at this point and he should not have any further decline. Greg tells me that he has no depth perception, no central vision, and limited color perception. Greg has lost the ability to do a lot of the simple things that he once took for granted such as driving, reading, watching TV, even finding his way around unfamiliar places unassisted. He said, “the most difficult part is that he can no longer see faces. The hardest part for me to accept is that I am unable to see my kids’ or wife’s faces anymore.” He did joke that his 8-year-old twins try to trick him now since “dad’s blind.”

Greg shared with me that he was very depressed in the beginning of losing his vision and did not have the motivation to do anything. Greg said, “I didn’t want to do anything the first six months after my diagnosis. I was depressed when my world was turned upside down. I was doing a lot of soul searching.” He also told me that he has always been a very independent person and he did not want to ask for help. He said, “I have always preferred to do things on my own. My biggest challenge in the beginning was asking for help. I had to swallow my pride and realize I needed help. After I fell down the stairs five or six times I finally realized that my stubbornness had to stop and that I needed to get assistance.”

Greg is the National Sales & Marketing Director at Containment 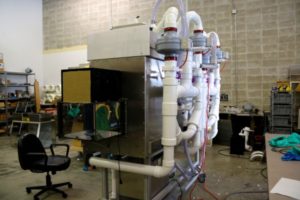 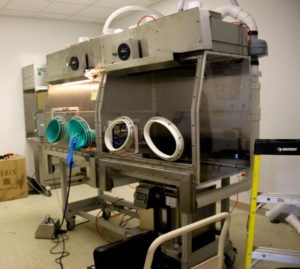 isolators are engineering control units that hospital pharmacies use to compound their drugs. The units provide an aseptic environment for the compounding process to ensure patient safety upon administration. Greg has worked for Containment Technologies Group for 10 years. When he first lost his vision, they were very supportive of him taking the time he needed to acclimate to his vision loss.

In November 2015, Greg learned about Indiana Vocational Rehabilitation Services. Vocational Rehabilitation (VR) is a state agency that assists people with disabilities in finding or retaining employment. To assist Greg in retaining his position, VR paid for Greg to have mobility training at BOSMA Enterprises. Through this program he learned to navigate with a cane and how to navigate public transportation as a visually impaired person. He told me he was relieved to learn to navigate the bus system. He said, “The toughest thing for me to give up was driving. It’s been difficult to be dependent on others to get around.” Greg’s children live part of the time with their mom in Center Grove, Indiana and he lives in the Broad Ripple area about 30-40 minutes away. He now sees his kids less often because transportation logistically is so difficult. His wife has to provide all the transportation for him, his kids, herself and her own children. He told me that she makes a lot of sacrifices to make sure he is able to see his kids as much as possible. He said his wife has gone above and beyond. Providing transportation for everyone including 5 children all ages 14 and under has come with a lot of sacrifice.

When he returned to work at full speed he told me, “It was not an easy process.” Greg’s VR counselor referred him to Easter Seals Crossroads to get an assistive technology evaluation to determine what types of technology could help him do his job tasks. He was assigned to work with Belva Smith, 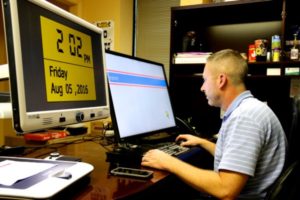 Assistive Technology Specialist at Easter Seals Crossroads. Belva came to his office to assess what Greg’s job was and determine what things he was struggling with and recommend different technologies that could assist him in performing his job duties. After meeting with Greg, she recommended magnification and screen reader assistive technology such as: JAWS, Magic Reader, Zoom Text, and a CCTV system.

JAWS (Job Access With Speech) is a computer screen reader that reads everything on your computer screen. Magic Reader is a chrome add-on that allows a user to adjust the font size and line spacing of the content on a webpage to allow for larger font. Zoom Text is software that can be used as a magnification and screen reader of a user’s computer screen. A CCTV is an electronic magnifier that magnifies the print of printed material that is put under the CCTV camera. The CCTV can also read aloud any content placed under the camera.

Greg has been in the process of learning how to use all of his new equipment. He prefers to use magnification, but told me, “I am right in the middle between using magnification and needing a true screen reader. I know I am trying to hang on to my vision more than I should be and have continued to try to use magnification instead of switching to a true screen reader.” Greg is performing most of his job duties at this point, but travel is still a challenge. Greg has always travelled for work and for enjoyment and is quickly adapting to his change as visually impaired. He told me that he has a trip planned to Las Vegas for work and a trip to Iceland with his wife in the next month or two.

He also uses VoiceOver on his iPhone. His stepson introduced him to VoiceOver on iOS devices and Greg said, “I am completely dependent on VoiceOver now. I am continuing to speed up Siri and can use an iPhone quicker now than most sighted people.” He also uses a KNFB reader, which is an app that allows him to take a picture of printed material and the document is read aloud.

Greg continues to try to learn new technology and become more skilled in using it. He said, “I want to learn to use the tools well enough that if I were in an unfamiliar environment, I could continue to use it so effectively that my new disability would cause no roadblocks.” He told me, “Everyone says I’m much further along in using technology than I give myself credit for.” He credits his wife and church family at Southport Presbyterian for helping him get to the point where he is now. He told me, “at first I was embarrassed to death about being blind. After a lot of soul searching, I began to accept it. He told me, “I now see life in an entirely different way. I’m at peace. I am kinder and friendlier than I was before losing my vision. It has taught me humility. I see so much more positive in the world now and have had amazing people brought into my life that I would have not known before losing my vision. I almost wouldn’t change it if I could.”

I asked him what advice he had for others and he said, “Cut yourself some slack. Don’t beat yourself up. I would advise someone to accept that things are different, find peace with it, and let people help you.”

Greg has embraced his blindness and is living a full life. He has begun to travel again with his wife and enjoying activities with his kids. He has taken up kayaking and even did a standup comedy routine at a comedy club open mic night where he told stories about his life as a person who is blind. Out of sixteen comics he found himself in second place. He found the experience to be therapeutic and fun but his wife did tell him not to quit his day job.

Greg told me, “I would not be where I am today had my wife not been so supportive. I was in a very dark place. I lost my faith there for a while, but her strength, patience, rock solid faith was so amazing. She is the biggest influence in bringing me back to the world again.” It was such a pleasure to talk with Greg and learn about his journey. Welcome “back to the world”, Greg! We wish you all the best in the future!