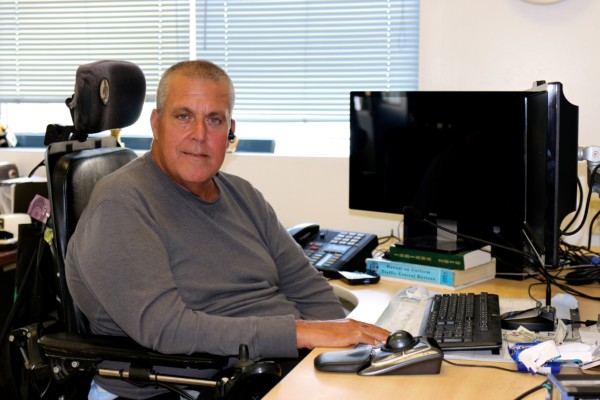 I met with Thomas Kramer at the the Indiana Department of Transportation (INDOT) Logistical Support Center/Centralized Sign Shop office on the east side of Indianapolis. Thomas has been a sign operation supervisor for 10 years. He oversees the sign shop that makes the signs for all state roads and 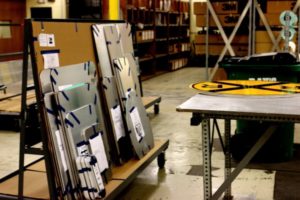 Thomas gave me a tour of the facility that had large printers, metal cutting 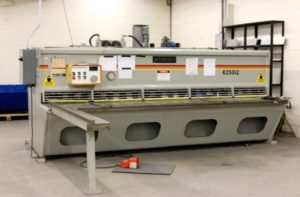 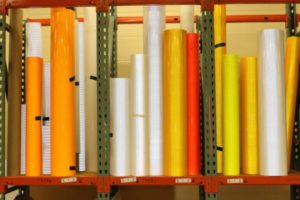 As we walked through the warehouse, I learned why Thomas had been working with Easterseals Crossroads’ Assistive Technology department. He told me 10 years ago he started to notice that his foot was dragging. He began to trip often and started falling. After seeking medical care, he learned that he had Familial Amyloid Polyneuropathy (FAP). This is a degenerative disease that causes nerve damage. This is a very rare disease for most parts of the world. There are areas in Northern Portugal where it is estimated that it affects about 1 in 500 people, but throughout the US and Europe the cases of FAP are estimated to be only 1 in 100,000. It is estimated that worldwide there are around 10,000 cases of FAP.

This hereditary disease causes protein to collect in the nerves and can affect your senses. Thomas has been told that his life expectancy is 10-12 years. He told me that he is in the 11th year of his diagnosis. He told me that 2 years ago he got an infection in his hip and the infection got into his bones. He made a decision to have his legs amputated to help stop the spread of the infection.

Thomas told me after the surgery to amputate his legs he feels better than he has in years. He said his immune system is better and he is not getting colds as he did prior to the surgery. Thomas also began to lose function in his hands. When he was at the Rehabilitation Hospital of Indiana (RHI) following his surgery he learned about vocational rehabilitation. Vocational Rehabilitation is a state agency that provides services to help individuals obtain or maintain employment. Thomas was concerned about how he would continue to work so he made an appointment with Vocational Rehabilitation to learn about services that could help him stay employed.

Vocational Rehabilitation assisted him in altering his current wheelchair to enable it to lift up and down so he can access the high tables they use at work to make signs. When he told his VR counselor that his hands were getting to the point that he could not type at all, the counselor referred him to Easterseals Crossroads for an assistive technology evaluation.

Mark Stewart, Assistive Technology Specialist, at Easterseals Crossroads met with Thomas at INDOT to learn what his day to day duties were and find out what challenges Thomas was having when trying to perform these duties. The first problem that needed to be addressed was how Thomas would answer the phone.

Thomas was unable to lift the phone to answer a call. Mark recommended a 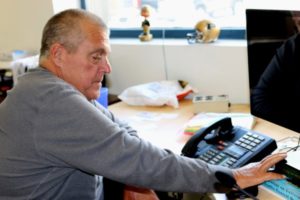 wireless bluetooth headpiece from Plantronics that allows a user to answer or cancel a call by wearing a wireless earpiece and using a one-touch handset lifter. The handset lifter allows a user to a tap the lifter and the lifter will physically raise the phone off the cradle for him to be able to answer the call. Thomas’ co-worker turns on the headset for him when he arrives at work and off when he leaves for the day.

David Frye, Assistive Technology Specialist at Easterseals Crossroads later worked with Thomas when he started having trouble with his headset working. He and Mark worked with INDOT”s IT department and Plantronics to trouble shoot issues that Thomas was having when he would leave the room and then come back and the telephone would not reconnect. Mark Stewart said, “I was very impressed and actually inspired by how well INDOT administration, INDOT IT, and his supervisor worked with us as part of a team in order to let him show how he was capable of continuing to do a great job for them like he had for so many years. Consumer +Family + Employer +Supervisor +VR + ESC Clinical AT + Community + Thomas = SUCCESS!” Mark went on to say, “The most inspiring thing to me of all was Thomas’s attitude! He reluctantly accepted assistance, but when he did he was very gracious. He seemed extremely driven to adapt to assistance and get back to work!”.

Thomas told me that the assistive technology specialists’ were great teachers and were very patient when teaching him how to learn to use Dragon and in figuring out the best microphone to use. He said they were also a great advocates for him in working with Plantronics to work out some technical difficulties they had in the beginning and troubleshoot his headset issues.

Thomas is now using his technology with no problems. He is also set up with a large L-shaped accessible table where he can fit his wheelchair under. He told me that he would not be able to perform his job without the assistive technology he is using. Thomas said he is thankful he is working. He told me, “I could have gone on disability years ago. Working keeps my mind off my problems.”

Thomas also credits his wife for where he is today. She is a nurse and has been a great caretaker to Thomas. He told me that his wife and family are so supportive and have kept him positive and given him the desire to want to keep actively working and living.

I meet a lot of people through doing these consumer highlight stories and it’s always a special day for me. I always remember a feeling coming from those meetings more than all the things we speak about and the feeling I left after speaking to Thomas was joy. He has a great sense of humor and speaks so highly of his family being so supportive and they seem like a riot. They teased him that he has outlived a dog that was very old and I learned that each one of them made their family homes and cabins accessible so no matter where they celebrate a holiday Thomas can get around easily. Thomas told me a story about his sister writing a letter into the Indianapolis Monthly when they used to do dating ads. He said they received tons of letters and he picked the one he liked the most and let his family and friends all read the letters and everyone chose the same lady that 28 years later he is still very happily married to today.

It was so great to see how assistive technology has kept Thomas working in a job that he loves. I asked him if he had any advice for anyone who is struggling and he said, “Don’t give up. Check your resources. I can’t say enough outstanding things about Mark and David from Easterseals Crossroads, they were so patient and understanding of what my needs were. I’m very thankful for the wonderful support they have given me.”