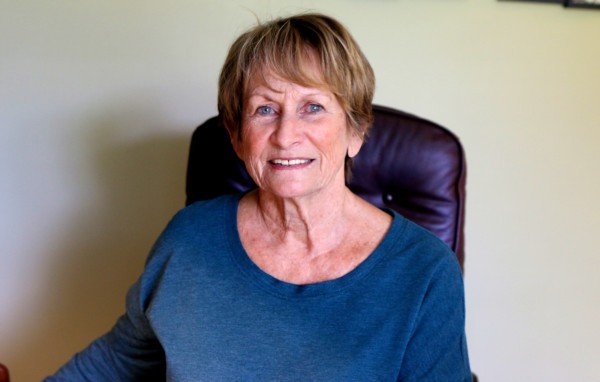 I traveled to Columbus, Indiana to meet with Glenda Eggers. Glenda has been working with Rebecca Carpenter, Assistive Technology Specialist, at Easterseals Crossroads to address her inability to read printed material because of her degenerative eye disease.

Glenda and Rebecca greeted me when I arrived and we went into Glenda’s home office. Glenda was a very warm and kind person and she began to tell me about the services she has been receiving and why she needs the services.

I learned that Glenda has Retinitis Pigmentosa (RP), which is an inherited disease that causes retinal degeneration. People who have RP gradual loose their vision. It typically starts with night blindness and a progressive loss of their visual field. In the later stages, people tend to lose more of their visual field and develop tunnel vision. In these late stages, most people have difficulty performing activities of daily living such as reading, driving, recognizing faces/objects, and difficulty walking around unfamiliar areas.

Glenda received services to teach her how to use a cane to get around and other tips on functioning in her home such as laying a piece of colored shelving paper on her white countertops so she could see the contrast when cutting food. To assess her needs in reading printed material because she could not read with a magnifying glass she was referred to Easterseals Crossroads for an assistive technology evaluation. An assistive technology evaluation is one-on-one assessment to determine the appropriate assistive technology to meet an individuals needs in their home, work, school, or in the community.

Belva Smith, Assistive Technology Specialist, at Easterseals Crossroads did Glenda’s initial evaluation. Belva recommended a Merlin LCD Desktop CCTV/Video Magnifier for her to use to be able to read printed material. Video 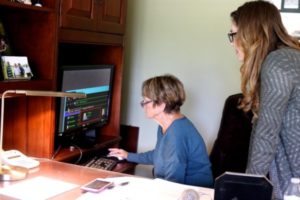 Magnifiers have a video camera connected to a monitor that allows the user to put printed material under the camera and the image is enlarged on the monitor. She also recommended ZoomText for Glenda’s computer. ZoomText is a software program that enlarges and enhances everything seen on a computer screen. The software can be used to magnify the screen and also has a reader function that will speak what is on the screen if the user cannot see enough to use the magnification feature.

After her assessment, Glenda’s case was given to Rebecca. Once VRS purchased the equipment, Rebecca delivered and installed Glenda’s CCTV/Video Magnifier and the ZoomText software. Rebecca then showed her how to use both pieces of equipment and also taught Glenda how to use the accessibility features on her iPad. The iPad has built in accessibility features such as magnification and voice over. Voice over is a screen reader that will speak everything that is seen on an iOS device.

Glenda told me that learning about all the things an iOS device could do opened up a lot of things to her that she was not able to do before. She got a bigger phone and can currently use a large font and color inversion to see the screen. She also uses Siri on the phone to read things to her. 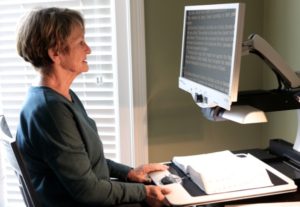 under her CCTV. She said, “I felt like it was a miracle. I felt like I could see again.” Later Rebecca relayed to me that Glenda was thrilled that she was able to use her Merlin magnifier to vote. She voted using an absentee ballot and was able to put the ballot under the merlin to read. She told Rebecca, “I was very happy that I could read the ballot clearly so my voice could be heard.”

Glenda told me about her experience in receiving training on her equipment, “Becca is so wonderful. She is so patient. She is just great. I can now read my 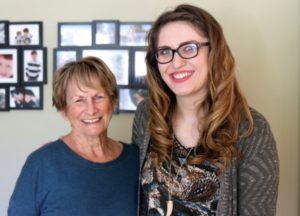 e-mail and use the Internet. My ultimate goal is to be able to fluently use ZoomText” where Becca replied, “you will be able to, you are doing so well already.” Glenda said, “ I can’t reiterate enough that it is so wonderful to be able to read my mail and Bible. I run a Bible study that is pretty involved and I am able to read on my own to prepare.”

I asked Glenda if she had any advice for anyone who finds himself or herself in her same situation and she told me, “There is so much out there and I would advise anyone to search out their options. It’s just so amazing that I can read. There is so much technology available to us now and it’s just wonderful.”