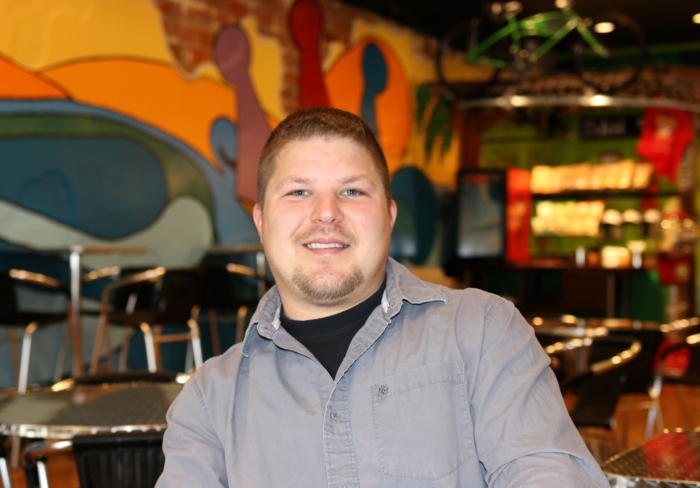 I arrived in a very small town in northern Indiana to meet with Jesse. I met with Jesse to learn about the services he received through Easterseals Crossroads and to learn how assistive technology is helping him maintain his current job.

I met Jesse at a local deli. When I arrived, Jesse told me they were getting ready for a fish fry in there and it was really smelly and asked if I would like to go to their local coffee shop. We laughed about people eating fish so early in the morning and took a brief walk over to a very cute local coffee place a few blocks away.

I knew before meeting Jesse that he had a visual impairment, but you would never have noticed it the way he navigated through his town. He later told me that he is able to get around fairly easily when he becomes familiar with a place.

Jesse told me that he was born in the south and was a military kid who moved all over the United States. Indiana is where he has lived the longest and he went to college in southern Indiana. It was in college where he met his now wife who is from the town where they now reside and how he ended up there.

Jesse started having vision problems when he was in high school. He first noticed his vision issues when it became difficult to recognize people in the hallway. He also started having trouble reading printed material. He eventually saw a specialist who told him he was blind in one eye and his peripheral vision was bad in the other eye. The doctor determined that he was legally blind and that his optic nerve was deteriorating.

In high school, Jesse began to use printed material that had large print. He told me that when he was in school the printed material was printed on very large paper and it made him uncomfortable to use it because he did not want to bring more attention to his visual impairment. He told me that he wanted to fit in and this made him stand out. He then got a special needs advocate who would take notes for him in class. He told me that the advocate understood his concerns and she would stay in the back of class for him as needed. She would go over the notes with him after class and he could take them home to study.

In his senior year of high school, he was connected with Vocational Rehabilitation (VR). VR is a state agency that helps individuals obtain or maintain employment. Jesse’s biggest struggle was being able to read printed material so VR purchased an Aladdin CCTV, which is a video magnifier that can enlarge the print that is put under it’s camera so it can be enlarged enough for someone with a vision impairment to read. Also during this time, Jesse’s mom was working at a university and was able to get him a copy of Kurzweil. Kurzweil is software that enables a visually impaired user to get access to printed and web-based programs by using optical character recognition (OCR) that produces text to speech output to access the material.

After Jesse graduated college, he got married and they moved to northern Indiana. Jesse spent several years as a stay at home dad while his wife went back to college. Jesse started substitute teaching a few years ago now that his wife is out of college and his daughter are in school full time. Jesse got the job at the high school because it was close to his home. There is no public transportation in their town so transportation is a big factor in where Jesse is able to work.

Jesse reached out to VR again when he started working to find out what technology might help him in his current position. Jesse’s main concern was that he did not want the students to know he has a visual impairment. He said, “High school students have a tendency to try to take advantage of a substitute teacher and I did not want them to have any other reason to think they could get away with something like being on their cell phones or anything else that is against the rule.”

When Jim met with Jesse, Jesse told him his main concerns were being able to access printed material on the spot to be able to access the material without the students knowing about his visual impairment.

Jim recommended that Jesse use an iPad Pro to access printed material. His thought was that the iPad is a device that is used by many teachers and students so the device would not stand out as being assistive technology even if it is used as assistive technology. With the iPad Pro, Jesse can take a picture of any assignment or worksheet a student is working on and can zoom in on the picture to enlarge the print. Jim also recommended using AirPods with the iPad, which are wireless headphones. He recommended that Jesse us the AirPods along with the KNFB reader app. This app uses optical character recognition (OCR) to convert printed text to speech. Jesse can use the app and have the information read to him through the AirPods discretely and then assist a student with their assignment without them ever knowing he was unable to see the work. 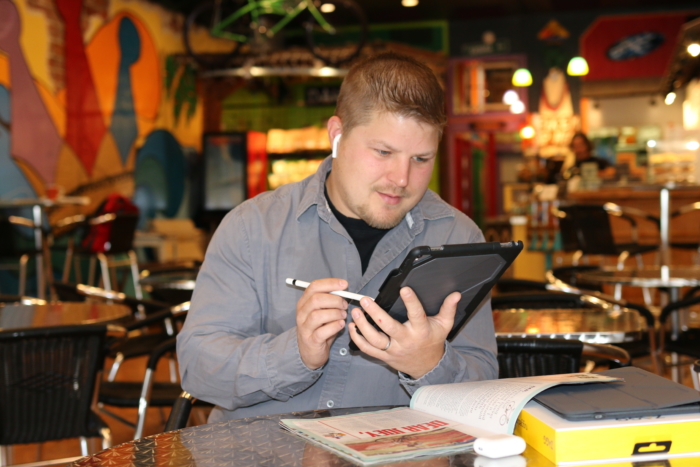 Jesse told me that the combination of using the KNFB reader app and the AirPods “ is phenomenal for my needs in the classroom. When a kid asks me any question I can either enlarge it with the iPad or have it read to me and can assist them on the spot.” He told me he was thrilled that Jim had come up with a creative way for him to use assistive technology in a covert way. He told me that it gives him the confidence to be a leader in the classroom and the tools to be able to help the students. With the technology that Jim recommended, Jesse is self-reliant to do his job and is considering becoming a teacher. He said, “It’s amazing that finding a different way to use a mainstream piece of technology was such a game changer for me. There is a lot of technology out there that people can use where they don’t stand out. That was important to me and Jim helped me find what I needed.”