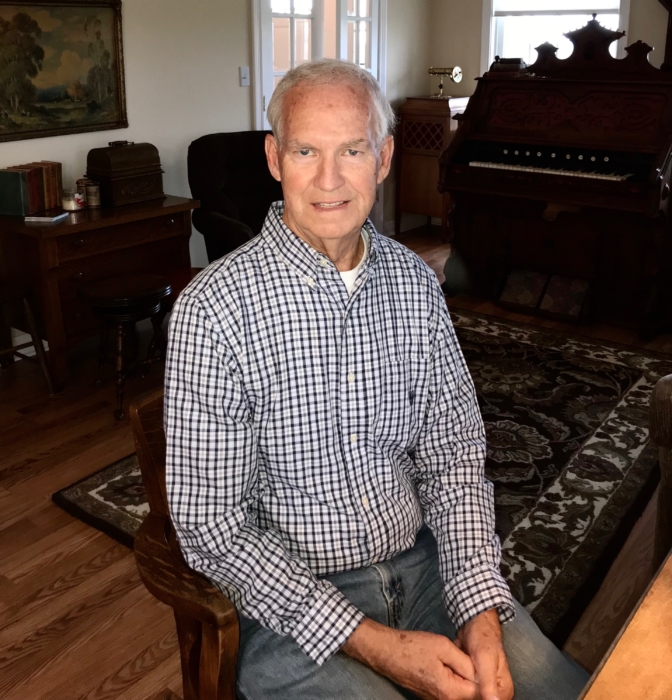 When I arrived, Berlon and his beloved Yorkshire terrier dog greeted me and they invited me to come visit in the living room. I asked Berlon to tell me a little about himself and quickly learned that he was a kind, modest, and soft-spoken man. I learned that he was born in Kentucky and graduated high school in Columbus, Indiana. He moved to Shelbyville, Indiana twenty-five years ago when he got married. He has a son and two stepchildren.

Berlon worked as a general electrician for Cummins, Inc. for thirty-eight years until retiring from there. Cummins, Inc. designs, manufactures, sells, and distributes engines, filtration, and power generation products. As a general electrician for Cummins, he was responsible for troubleshooting machinery that was broken at several of the Cummins factories. Berlon told me that he loved working for Cummins and he was always very good at fixing things.

Three and a half years ago, Berlon started having vision problems. He knew that vision problems ran in his family so he went to see a specialist who diagnosed him with Retinitis Pigmentosa (RP). RP is a genetic disorder that causes retinal degeneration. Berlon tells me that he has good peripheral vision for now, but is unable to read or write. He currently gets shots once a month to prevent the blood vessels from growing and causing further eye damage.

Berlon’s vision continued to decline and he had to stop driving about two and a half years ago when it started affecting both of his eyes. He told me that giving up driving was the hardest thing about losing his vision. He lives in a rural area where there are not any transportation options and is now dependent on his wife, who still works full time, for transportation.

Berlon’s sister also has RP and was familiar with Easterseals Crossroads’ services and told Berlon about the loan library. She reached out to Justin Amber, Equipment Loan Specialist at Easterseals Crossroads, on Berlon’s behalf, to arrange for Berlon to borrow a CCTV. Berlon struggles to read printed material and a CCTV is an electronic desktop magnifier that uses a stand-mounted video camera to project an image on a screen. Once the printed material is projected on the screen, that screen can be used to magnify the print. The CCTV also allows a user to change the contrast, which can help people read print more easily.

After she spoke with Justin about Berlon’s needs, Justin scheduled a time to bring Berlon the equipment to try. Justin brought the CCTV to Berlon’s home 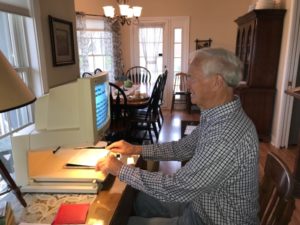 and Berlon was so happy to be able to try the CCTV and see if it was helpful for him. Berlon said he was thrilled that he could see to read his bills and his bible. He was thankful to be able to try it out and was so happy to determine that it was a tool that would give him a little more independence in doing reading tasks on his own. After determining the equipment was useful to him, Berlon was fortunate enough to have one given to him from his church. He now has his own CCTV and uses it daily.

While talking with Berlon, we discussed how he has always been mechanically skilled. He told me that he enjoys working on classic muscle cars and owns several of them that he still works on. He took me on a tour of his garage so I 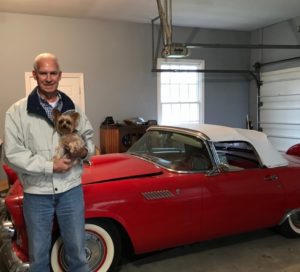 could see his collection. He told me that it keeps getting harder to work on them because of his vision. He showed me a hand held magnifier that he uses to work on his vehicles and told me about his challenges. I asked him if he had ever heard of a hands free magnifier. He told me that he had not and I happened to have one in my car. I got the hands-free magnifier out for Berlon to try and he told me that was exactly what he needed to make working on cars easier for him. He was able to get the information about where to buy the hands-free magnifier and planned to purchase one. Berlon said he was so happy to know about the equipment loan library so he could learn what would be available to him and he looked forward to learning about other types of equipment that might be helpful for him. It’s always fun to be there when someone learns of a useful piece of equipment that can increase someone’s independence. This is the goal of our program and it’s a nice reminder that the equipment is not only available to help do every day tasks, but also is useful in assisting people in being able to continue hobbies they are passionate about.

Before I left, I asked Berlon if he had any advice for our readers and he said, “If you have a degenerative vision loss, the most important thing to do is to jump on it when you can before you sight gets worse. Learn what equipment is out there and learn to use it while you still have some of your vision and reach out to others with vision problems or Easterseals Crossroads to learn about technology that can make doing things easier. Things take a lot longer, but with some help you can still do many things.”