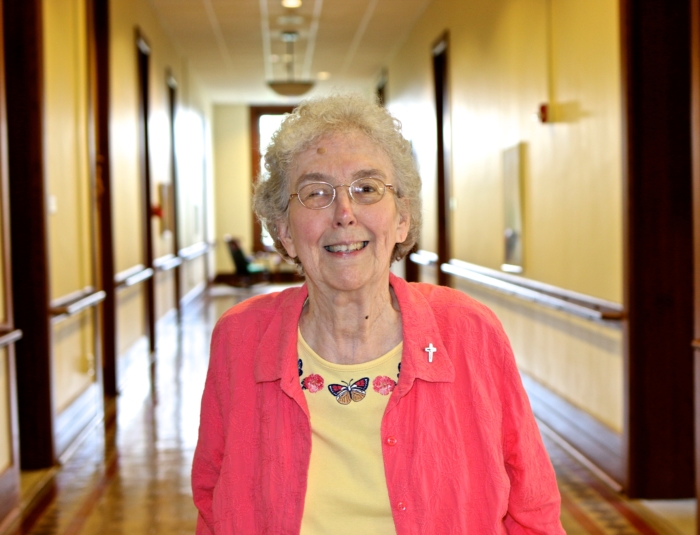 As a graduate of Indiana State University in Terre Haute, Indiana I was familiar with St. Mary-of-the-Woods; however, I had never been on the campus and was not aware that it was also home to the Sisters of Providence. I recently got the opportunity to visit the campus to meet with Sister Gloria Memering so I could learn about her experience in using the INDATA Project at Easterseals Crossroads Equipment Reutilization Program.

The Equipment Reutilization Program is a program that takes in donated computers, CCTV’s, video magnifiers, and other assistive technology devices. Donated computers that are received from donors are wiped of all previous data and refurbished. All equipment is sanitized and repaired if necessary. Once cleaned and in working condition these items are given to individuals  who live in the state of Indiana and have a documented disability for free.

When I arrived at the gates of the campus, I was instantly in awe of the beautiful grounds and architecture. I parked at Providence Hall and was greeted by Sister Gloria. I instantly knew it was going to be a great visit when I was welcomed by her with a big smile and a very warm presence.

We entered a lift that allows individuals to enter the historic building without having to climb any stairs. Sister Gloria took me up to her living quarters and we sat in a common area so I could learn more about her.

Of the twelve girls in Gloria’s class, six have remained and celebrated their 60th jubilee this year. The process of becoming a Sister is called Discernment. Sister Gloria took temporary vows for one year and then three years later took her final vows. During her discernment process, she finished her education and got a bachelor’s degree at St. Mary-of-the-Woods College in music education. Until the late 60’s, the sisters were given another name and Gloria was given the name Sister Cecilia who was considered the Catholic Church’s Patroness of Music.

After graduation, Sister Gloria (aka Sister Cecilia), was sent on different missions to teach music at several different Catholic schools and churches. Except for one year in Fayetteville, North Carolina, her missions were in Indiana. She was sent on teaching missions and taught in schools and churches in Sellersburg, Terre Haute, Vincennes, Evansville, and Jasper.  Sister Gloria says, “I have loved my life filled with music.”

She then retired at the age of 71 to be actively engaged with her community at St. Mary-of-the-Woods. She said, “The saying here is that a person is recycled rather than retired.”

Sister Gloria has had detached retinas in both eyes and has had multiple surgeries in attempts to repair her vision throughout the years. The surgeon was not able to reattach the retina in her last surgery, which resulted in her having function in only one eye and some lack of depth perception. Sister Gloria has difficulty with printed materials due to her failing eyesight, but can still read the top notes of music and directs a weekly sing-a-long for sisters and lay people in the health care facility on the grounds. Sister Gloria loves directing these sing-a-longs and really enjoys being involved with the music memory program for those with various sufferings of dementia.

She also volunteers at the reception desk in two buildings onsite.  She said, “I love working the desk because I can interact with the students at the college and the many visitors to the campus.”

Sister Gloria learned about the Wabash Independent Living and Learning Center (WILL) from Sister Elaine who worked at the WILL Center once a week. The WILL Center is a not-for-profit organization that offers services to individuals with disabilities who in the Wabash area. The services are provided to help individuals with disabilities to remain living independently. They offer many services such as: advocacy, information and referral, independent living skills training, and assistive technology information.

Sister Gloria said, “Sister Elaine thought I could benefit  from finding out what services might be available to me. I have always loved to read and had not been able to with my vision problems. At the WILL Center they helped me get a talking book special tape recorder. I was so grateful for the help and love being able to listen to books. I listen to about three to four books a week that I get from the Indianapolis Library.”

The Indiana Talking Book and Braille Library is provided through the Indiana State Library. The talking book is a free library service that is provided to the residents of Indiana who can’t use printed material due to a visual or physical disability. Individuals can borrow braille, digital audio, or large print books and the materials will be mailed directly to their homes.

It was at the WILL Center that Sister Gloria learned about the INDATA Project’s equipment reutilization program. She learned that she might be able 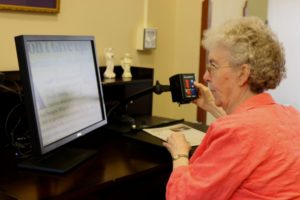 to get a desktop video magnifier, which would allow her to read printed materials. Sister Gloria filled out an application for the desktop video magnifier and when one became available it was delivered to her. She decided to put the magnifier in the common area of the sister’s living quarters so anyone who needed it could use it. Having this 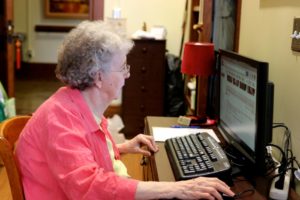 equipment would allow the Sisters to read their mail independently or access other printed materials. Sister Gloria said, “I was so thankful to receive the magnifier and was so happy that it could be put in a common area to help other Sisters with vision problems.” Sister Gloria also received a reutilized computer that she keeps in her living quarters. She said, “I also enjoy having a computer so I can communicate with students I once taught and keep in touch with friends and family.” Sister Gloria showed me her living quarters and while there checked her email and was excited to get one from an old student who shared pictures of her newborn child.

After talking with Sister Gloria for a few hours, we went to lunch with her fellow Sisters. She then took me on a wonderful tour of the beautiful campus where I learned that the mission of the Sisters of Providence began in France when Saint Mother Theodore Guerin was sent here to establish the community. In 1839, the new Bishop of Vincennes, a native of France, asked the French congregation to send Sisters to Indiana to start a mission to educate the pioneer children in the Indiana wilderness. In 1840, she and several other sisters were sent to live with the Thralls’ family. Saint Mother Theodore Guerin and fellow sisters traveled by boat from France for nearly 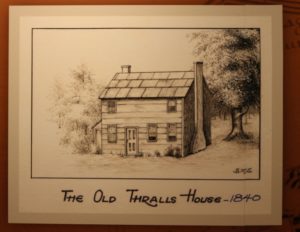 three months. They lived in very small quarters on the boat and once they arrived they discovered they would be in the middle of the remote land where there was not a village or house in sight other than the farmhouse owned by the Thralls’ family. The sisters spoke no English and knew no one here.

Mr. Thralls invited the sisters to live on his property while they started to build an academy for girls. The Thralls family had six children and they all moved downstairs in their small farmhouse and the six Sisters lived upstairs. Saint Mother Theodore was able to open an academy for girls in less than a year and eventually the farmer sold some of the farmland to the community and moved to the village.

The Sisters of Providence would go on to open more than 20 schools. The 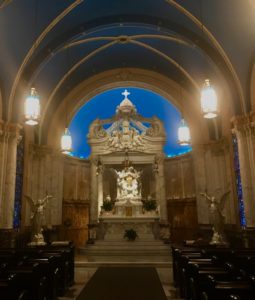 academy that was once a small girls’ school in the wilderness became Saint-Mary-of-the-Woods College, which is now a co-ed liberal arts institution. The community continued to 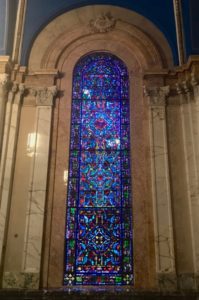 grow even after her death and many beautiful buildings were built on the campus that Sister Gloria showed me.

We toured the Blessed Sacrament Chapel, which was built in 1923. This stunning chapel is designed in Italian Renaissance style. The altar and pillars are carved out of beautiful Carrara marble and the stained glass windows were created by Royal Bavarian Art Studios in Munich, Germany. We also toured the Church of Immaculate Conception, which was 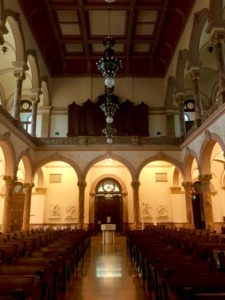 built in 1907. It took 21 years to build the church and it was patterned after The Church of the Holy Trinity in Paris.

The large campus has many beautiful buildings and statues including: Our Lady of Lourdes Grotto (1928), Saint Anne Shell Chapel (1876), Cemetery (1864), etcetera. To generate revenue and support sustainable living they now have an 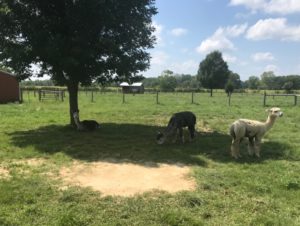 Alpaca farm and a 5-acre USDA certified organic garden where vegetables are grown and then sold in their farm store. There are close to 300 Sisters of Providence and almost as many Providence associates who continue on in the mission of helping others.

The desktop magnifier that they received will allow the sisters with low vision to access printed materials which will help them continue to serve the community. Sister Gloria expressed how thankful she was for the equipment and the ability to be able to share the magnifier with fellow Sisters. She even commented on how fitting it was to get recycled equipment for the recycled, not retired, Sisters.

If you or someone you know is in need of equipment such as a desktop magnifier or reutilized computer and would like additional information, please contact Alvin Alviar at aalviar@eastersealscrossroads or via telephone at 1-888-466-1314.