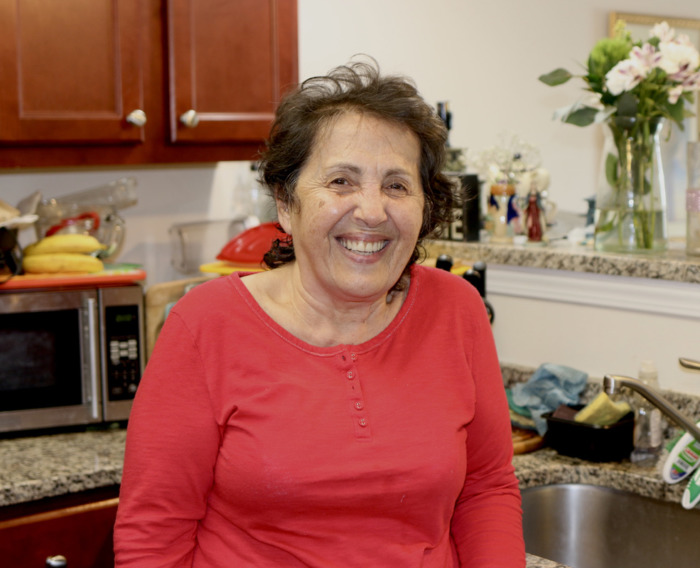 Karolina Shiroka was born in Albania. Her family moved to Macedonia and then to Croatia where she finished high school. After finishing high school, she worked at the post office. In her 20’s, she moved to Indianapolis for her arranged marriage to a man who was from Albania, but had lived in Indianapolis for several years.

After they were married, Karolina had 3 children and worked as a stay-at-home mother. Her husband was a jeweler and she often helped him with office paperwork. They spent many years traveling the country going to different jewelry shows. Karolina said she was happy that she got to see so much of the United States on these trips. She was married for 25 years and then they divorced.

Karolina never had anyone teach her English. She spoke Albanian to her then husband and picked up what English she knows from her kids or from the television. She spent all of her time devoted to raising her children and keeping them involved in extracurricular activities.

After her divorce, Karolina needed to join the workforce and had no experience and wasn’t sure how to even go about finding a job. Near her home they had built a new Kroger superstore and she decided to go in to inquire about a job. With no job history, they offered her a job as a cashier and Karolina worked there until she retired. She told me she was so thrilled to be making her own money and have her own independence.

While working at Kroger, Karolina started having vision problems. She went to an eye doctor where she learned that she had a genetic disorder called Retinitis Pigmentosa (RP), which is a rare genetic disorder that affects the retina’s ability to respond to light and cause a slow loss of vision. The doctor prescribed glasses and by the time she retired she was having a lot of difficulty keying product codes or keying any credit cards that didn’t automatically process when being swiped.

Eventually, her night vision declined and then she lost all of her peripheral vision and her vision continues to have more and more tunnel vision. She got to a point where she could not pass the eye exam for a driver’s license and had to give up driving. After giving up her license, she moved to an apartment that is walking distance to the things she needs like a grocery store and also uses the IndyGo bus system.

Karolina had been able to read printed material if it was large print or had high contrast. When she started having trouble even reading large print, she contacted The INDATA Project at Easterseals Crossroads to see what services they had available to help her. She spoke with Justin Amber, Equipment Loan Specialist, who discussed her struggles in reading her mail and other printed material. After speaking with Karolina, Justin reached out to our Equipment Reutilization program and learned that there was a desktop magnifier available to be given to Karolina for free. 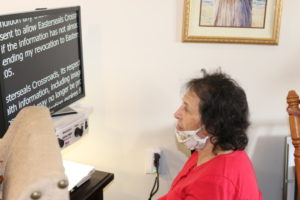 how to operate the machine. Karolina said, “I was so happy to receive this equipment. My daughter and son-in-law are always so helpful, but I was thrilled that I would not have to ask them to read all of my mail. Justin was so patient in setting it up and showing me how to work the machine. He really has a special gift in making senior citizens feel heard and I appreciate his help so much.”

Karolina is learning a lot about resources available to her such as books on tape and plans to continue to learn about assistive technology that can help her as her vision declines. She plans to live life to the fullest enjoying her 2 grandchildren. In May, she will be going to visit her daughter and grand-daughter in Brooklyn, NY and she plans to take a hand-held magnifier along with her.