Sony is challenging Google Glass with its current prototype of Sony Smart EyeGlass.  Sony’s new smart specs are comparable to Google Glass in several ways, but are much more obtrusive appearing like a pair of unwieldy 3D glasses.

The Sony Smart EyeGlass acts like a secondary screen for an Android smartphone, connecting via Bluetooth or Wi-Fi.  Once paired, the glasses will display information in the view of the wearer, overlaid on top of the 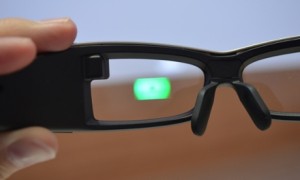 real world view.  Sony’s device uses a tiny projector and hologram system to display a clear green image in the wearer’s vision, which appears to hover about 2 meters away.  The glasses have a camera mounted in the left-side lens and use an accelerometer, gyroscope and compass to track the motion of the wearer’s head.  One of the apps demonstrated is Wikitude.  Once opened, the app augments reality by displaying a landmark and other information pinpointing the location as the wearer looks around.

Unlike Google Glass, the controls to operate the device are not found on the frames.  Instead, the user controls the glasses with a touchpad remote the size of a hockey puck.  The main purpose for this remote is to house the battery, which is currently too large and heavy to wear on the face.  However, by the time the Sony Smart EyeGlass is available on the market, the battery will be slimmed down eliminating the need for this handheld remote.

In its current state, the wearer can control the glasses by speaking with apps recognizing voice commands.  But the microphone is found on the remote, which may be inconvenient.

The gadget is only in the prototype stage right now, and Sony is working to improve it.  The company hopes to have the finished, sleek product available on the market within the next year or two.