Well folks, it’s finally here!  Apple’s new payment system, Apple Pay, was released yesterday.  I have mentioned this new payment system in two blogs both last month and last week, when I covered Apple’s two large events.  If you’ve read those past two posts, you probably know how excited I am for Apple Pay.

If you don’t yet know my eagerness, here’s an excerpt from my blog on the iPhone 6 Event that sums it up pretty well:

…I will first have to admit my love for shopping, but there is one part I strongly dislike: checkout.  When I head to checkout, I have to rummage through my purse, to get my wallet, to get my card out…  It’s personally a challenge for me and my clumsy fingers.  There have been a few instances where all the contents of my wallet end up on the floor; not only is that embarrassing, it’s also a major security problem.  And if I do successfully obtain the plastic card, I have to reach up and attempt to swipe it then enter a PIN number on a keypad I can’t even see?!

Moving on, I do always have my iPhone handy.  For years now, I have dreamt of how to make the payment process easier: “What if I could just save my card in my phone securely?”  With Apple Pay that is now an option!  The wasted moments of fumbling for my card may soon be a thing of the past…

As of yesterday, if you have an iPhone 6 or iPhone 6 Plus you can officially start buying things with the touch of a finger and by waving  your phone over an enabled Point of Sale (POS) system.  Though my enthusiasm of Apple Pay is obvious and unwavering, I found my knowledge of Apple Pay to be too limited.  So I did more research and below are my findings.

1. Apple Pay has been labeled as a “digital wallet,” but it is much more complicated, comprised of multiple parts:

Apple Pay lives inside Passbook, which according to Mashable “was originally designed to hold digital airplane tickets, coupons, gift cards and movie tickets; you can also use Apple Pay to add dollar amounts to, say, your Starbucks Rewards card.”

The bad news is that credit card companies are only part of the equation.  Whoever issues your card (usually your bank) also has to support Apple Pay.  Apple says they have the “top banks” and added 500 since announcing the payment system in September.

If you try to add a credit and debit card from a separate bank, you’ll be shown the following: 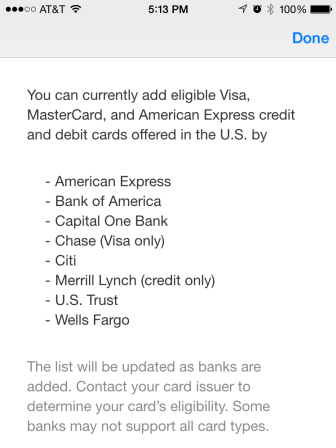 Adding credit cards to Apple Pay can be as simple as taking a photo with your phone’s camera.

You can decide which card you want to use as your default credit card, but you can store multiple credit cards in Apple Pay.

4. Apple Pay may be the end of credit card numbers:

Throughout the past year, there have been millions of customer records, including credit card numbers, stolen from Target and other major retailers in a data breach.  Apple Pay increases your security by eliminating credit card numbers sitting in a merchant’s database.  To do this, a device-specific number is tied to your actual credit card number as well as to your device.  In other words:

That means even if someone hacked Target’s system again and collected all these numbers, they would be of little use, since the numbers are tied to specific iPhones an iPads.”  (Source: Mashable)